A Doctor A Day – “Love and Monsters”

If Lars von Trier had thought of it, it would have been one of the Five Obstructions.  Make a Doctor Who episode, but don’t use The Doctor. It rather limits the drama, doesn’t it?  far from it, it gives you a chance to do a story about friends and mystery, and… 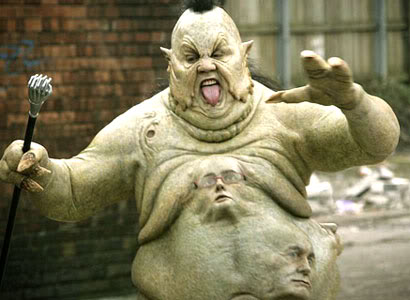 Elton Pope (Not that Elton, and not that Pope) is relating his adventures on his video blog.  He’s just met The Doctor, who was fighting an alien in a disused industrial building…as he does.  Elton begins to relate his history a bit – he remembers seeing The Doctor in his kitchen back with he was a toddler, as well.  He grew up rather normal and has a pleasant life, until a couple years ago when London started getting regularly attacked by aliens.  The Autons, the Slitheen, the Sycorax, all seen through his eyes.  He begins to search about the Internet, and finds a blog by a young woman named Ursula Blake, with recent photos of The Doctor, who looks no different than when he appears in Elton’s kitchen decades ago.

Ursula introduces Elton to a group of her friends, fellow Doctor-sighters and searchers, who meet regularly in the local library.  They all share the tidbits they’ve discovered about him throughout history.  After meeting for some time, Ursula suggests the club needs a name. Elton suggests “LInDA” – The London Investigation ‘n’ Detective Agency.  LInDA slowly become more of a social club than a tin-hat society, and the all become proper friends.  That is…until Mr. Victor Kennedy appeared. A strange man suffering from a skin complaint (Exceezma…like Eczema, but far worse).  He claims to have information about The Doctor, and shows them that they’ve lost their way in their investigations.  Kennedy has access to a staggering amount of information about the Doctor, including data from Torchwood. He hands out pictures of Rose Tyler, and sets LInDA off on the task to find her. And  in amongst the investigations…the members of LInDA are slowly going missing. 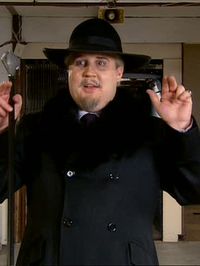 Friends are made, loves are lost, and a monsters stands revealed. Oh, and The Doctor shows up, eventually.

There’s been bits of humor in every episode, but this is the first episode that’s elbow-deep hilarious.  The episode was created by necessity – the BBC asked for a Christmas episode with this season, but didn’t add any time or much money to the budget.  So the producers were forced to find a way to force a fourteenth episode into the schedule, one that would have very little of The Doctor and Rose, as the actors simply wouldn’t have time to shoot another full episode.  So with a short sequence at the beginning, an appearance at the end, and photos and mentions all in between, you get a great bit of sleight of hand that feels like a full Doctor appearance.  The acting in the episode is wonderful as well, featuring British comedy star Peter Kay as the baddie, and Camille Coduri making a return as Jackie Tyler.

LInDA is a name Russell T Davies had made up for a earlier children’s show he’d written years back called “Why Don’t You?”,  The Absorbaloff was created by a child as part of a Blue Peter competition. Russell begged for one more alien for the alien, with the opening sequence, and they gave him one.  He even gave it a name – the Hoix.