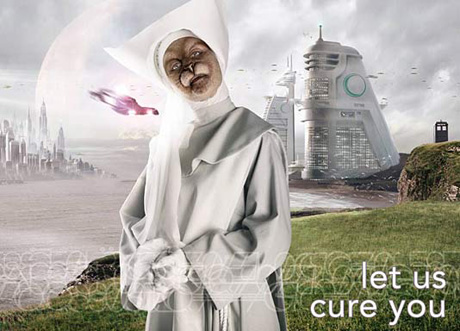 A trip to the future, a return of a foe presumed dead (get used to THAT one) and a moral conundrum.  And it all happens on…

The Doctor and Rose travel back to the five billions, to the time after The End of The World, to New Earth, the city of New15 York. The Doctor got a message from someone via his psychic paper, asking him to come to his aid at a nearby hospital.  But someone is watching, and as soon as the pair try to enter the elevators, they are separated.  Rose is sent to the basement, and is confronted by Lady Cassandra O’Brien, the last pureblood human, and the baddie behind the events on Platform One.  Saved from her apparently grisly death by cloning a new “body” from leftover parts (parts from the …back), she barely survives in the basement of the hospital, and has made plans to move on.  And for Rose to come along, another pureblood human, specifically one responsible for nearly killing her…well, when the fates hand you an opportunity like that…  Cassandra uses a device to transplant her mind into Rose’s body, and begins to take stock of new assets.

The Doctor, meanwhile, was summoned by The Face of Boe, who he met on Platform One as well.  The Face is dying, and his nurse, Novice Hame, explains that legend says that as he dies, he will impart great knowledge to someone like him, “A traveler, a lonely god”.

Amazingly, Cassandra’s not the real threat.  The Sisters of Plenitude, a feline race who run the hospital, have been breeding clones expressly to infect with every disease known to man, for the purpose of finding cures for them.  They maintain the clones are not sentient, but as soon as they’re awakened, that’s immediately proven untrue.  The Doctor starts to investigate, and also starts to notice that Rose knows a bit more about technology of the year five billion than she should.

So The Doctor has to find out the secrets of the hospital, get Rose back in charge of her own body, shut down a sect of cat-nuns, and stop a horde of disease-ridden clones from overrunning the place.  Not a bad first day out…

The Christmas episode was a bit different from later ones would be – it was the first appearance of the new Doctor, and was more “in continuity” with the rest of the season, as opposed to being a stand-alone adventure. It also features other recurring characters, as opposed to later specials that would only feature The Doctor and all-new characters. Functionally, it’s the first episode of this season.  So this episodes starts shortly after the special, with The Doctor and Rose off on new adventures, already with a much lighter tone.

Both Billie Piper and David Tennant get to camp it up a bit as Rose and The Doctor get inhabited by Cassandra, with the requisite fun and silly accents.  Davies excels at keeping a balance between drama and humor in his stories, and this one’s a good example.

One could argue that this plot is an argument against various forms of experimentation.  I prefer to stand by Dr. Mordin Solus’ philosophy from mass Effect – “Use of sentient beings in scientific tests disgusting. Have personal standard – Never experiment on species with members capable of calculus. Simple rule, never broke it.”

We see a new emotional side to The Doctor here.  Not only is this the first time he’s “Sorry…so sorry” at the site of the clones, it’s also the first time he gives a foe who truly deserves it a merciful end.  One of the things we see him do many times is offer threatening aliens a chance to leave in peace.  Sometimes they refuse, and his judgment is swift and hard, sometimes others pull the trigger (like Harriet Jones did last episode) and he’s just as merciless on them, but sometimes, if they deserve it, he helps them.  Cassandra really did try to help at the end, and once she came to peace with her fate, The Doctor gave her a chance to at least die happy.

The payoff to the promise from the Face of Boe wouldn’t come till next season, tying into the Big Bad for that season.  So even though Moffat is doing it with more deliberation, Davies was also setting up multi-year plotlines, teasing events quite a ways off.  Looking back like this, it’s amazing how many things we ascribe to Moffat were already being done from the beginning.  More fodder for the “who’s a better showrunner” argument, certainly.