The Doctor Who Gift Set, for the fan with all the time in the world

If you’re not sure what to buy somebody who’s a fan of something, you can’t go wrong by giving them everything. 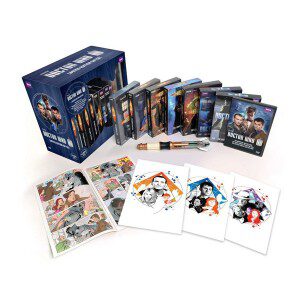 This year’s Doctor Who analogue to the Official Red Ryder Carbine-Action Two-Hundred-Shot Range Model Air Rifle is the Doctor Who Limited Edition Gift Set, collecting the entire run of the new series on DVD, from Eccleston to Tennant to Smith.  It also includes a replica (dang) of the eleventh Doctor’s Sonic Screwdriver, a copy of IDW’s Doctor Who comic, specifically the San Diego Comic-Con special issue, and a set of lovely art cards of the Doctors of the new series and their companions.

Each of the series sets is as complete as they can physically be without including DNA samples.  All the episodes, plus the episodes of the late lamented Doctor Who Confidential, cut scenes, episode commentaries, prequel episodes, the Children in Need and Comic Relief sketches, features from the website, and believe it or not, many more.

Rounding out the set is the trilogy of specials BBC America did as a lead-up to the new season: The Women, Destinations and Timey-Wimey of Doctor Who.  In each, cast members, celebrities and various dignitaries all ruminate and reminisce about the series, discuss the possibility of the technology of the show crossing over to the real world, and compare how quickly they’d race into the old TT40 if it landed and The Doctor held out his hand and said “Join me”.

Now, a set like this demands one’s attention.  And that’s exactly what I’m going to give it.  Starting tomorrow, I’ll be doing A Doctor A Day, where I’ll watch and review (at least) one episode a day, all in preparation for the new Christmas episode The Snowmen, lensing, oddly enough, on Christmas Day.

The Doctor Who Limited Edition Giftset is available via Amazon and any number of online purveyors of fabulous.