A Doctor a Day – “Aliens of London / World War Three”

Using the new Doctor Who Limited Edition Gift Set, your noble author will make his way through as much of the modern series as he can before the Christmas episode, The Snowmen. And thank you all for wearing your ID cards…

Rose has let time get away from her a bit, but once that’s sorted, she and The Doctor have come back just in time for the…

Rose returns home after a brief time away…no, sorry check that; she’s come back a year after she left, relative to the current timeline. So after a great deal of explanation to friends and family as to where she’s been, she ruminates about the things she’s seen on her roof, how nobody else knows about what she knows…until the giant alien spaceship comes careening through the skies over London and into the Thames.  Unable to make it past the police blockades in central, they watch the events on the TV. 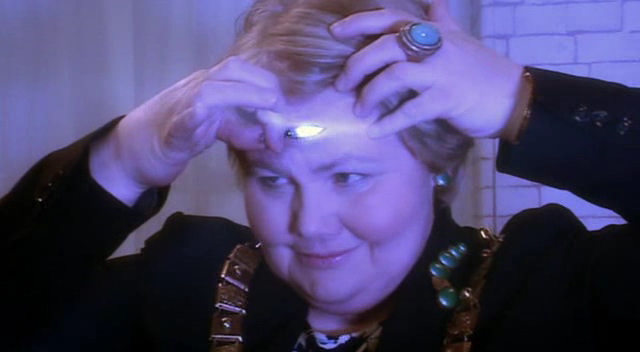 Inside Number Ten, the Prime Minister is missing, and a minor back-bencher, in a staggering coincidence, is the highest-ranking politician in the city, and is named acting PM.  A little TOO coincidental – as soon as he and a couple of civil servants are alone in the PM’s conference room, they begin to laugh with the confidence that a plan has come together. The spaceship, and the alien within, are all a dodge to place these three people in power.  They are members of a race called the Slitheen, who are packed into the skins of the now deceased politicos like Wonder Wart-Hog into his Philbert Desanex suit.  They plan to panic the planet into releasing nuclear hell, wiping everyone out, and sell off radioactive chunks like a galactic Odd-Lot.  The Doctor needs the help of Jackie and Mickey to do the only thing that can be done to eliminate the threat – blow up Number Ten.

This is the first two-parter  of the new series, and the end of the first episode is a perfect old-school cliffhanger, with every member of the cast in peril in separate locations.  This also gives the impression there’s more than a couple Slitheen suits, as well.  Even now, the subtle art of sleight of hand can stretch a dollar.

As he did with the Nestene, The Doctor offers the Slitheen a chance to walk away.  We see that happen quite a bit in the new series; like Sun-Tzu said, do everything you can to prevent going to war, but when you have to, go in hard and fast, with intent to win. Odds are The Doctor helped co-write that book.

Once again, the collection of recurring characters grows.  Penelope Wilton brings us the spectacular Harriet Jones, MP for Flydale North, who will move on to great things in a very short period of time.  And another member of the Torchwood crew makes an appearance; Toshiko Sato, seen here as the coroner examining (and running from) the little alien.  The Slitheen themselves became recurring characters – they’ll return later this season, as well as more than a couple times on The Sarah Jane Adventures.  One recurring actor, Lachele Carl, is almost unnoticed, but she’s the only one to appear as a named character on all three Who series. The American newsreader she plays doesn’t even get a name in this adventure, but does eventually – Trinity Wells.  She appears every time news about aliens is reported from the US in future episodes throughout the Davies run of the show.

There’s an extra on the DVD that talks about the miniature work used to get the shot of the ship crashing through Big Ben.  After the shot was completed with the LEFT wing of the ship tearing through the clock, the CGI team realized it looked better with the RIGHT wing going through.  So the miniature shot was flipped, but not corrected – if you look quickly, you’ll see the number on the clock faces are reversed.

Re-watching the Eccletson season, I’m struck as how much more realistic the world feels.  The look on everyone’s faces as an alien ship crashed in their midst is that of not horror, but mild inconvenience.  Jackie’s reaction to Rose’s prodigal return is honest and angry. The series of shots as a progressively larger number of people fill up Rose and Jackie’s flat, more there to scold Rose than to see the events on the telly are hilarious. And at the same time, he shoehorns in the fact that uncontrollable flatulence is a tell for a Slitheen.  The balance of the serious and the silly is expertly done. Moffat’s interpretation of the world is much broader, more tongue in cheek,  Not better or worse, just different.  Similarly, each of The Doctor’s companions had family, as I’ve mentioned before.  Amy didn’t – no parents, just a mysterious aunt who never even appeared on screen.  This allowed the trips they took to be less tied to home.  When they brought Rory into the narrative in a larger way, he joined the crew, resulting in no substantive reason to pop back to Earth for a while.  Only in the first half of the season did we meet Rory’s Dad, and we learned that their visiting times on Earth were few and far between.

If anything, I think the more serious (relatively speaking) take Davies took in his years gave Steven the freedom go go bigger in his run of the show.  If they’d started that big, it might not have caught on.  It certainly looks like the back half of the new series will take a more serious turn, as the last couple of episode certainly did, but we’ll see how much of a balance Moffat can keep.