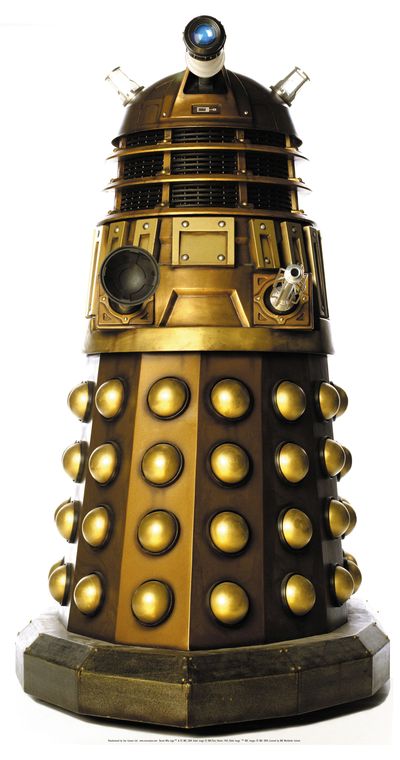 Mr. Henry Van Staaten owns the Internet.  He also has a museum of alien artifacts under Utah, including a Slitheen claw, a Cyberman head, and a…

The TARDIS lands in 2012 (!) in Utah, or more precisely, under it.  They’re in the personal horde of Henry Van Statten, an impossibly rich American who obtains alien artifacts, reverse engineers their technology, and sells it for profit.  The Doctor picked up a distress call from his one living exhibit, a mysterious creature that Van Statten calls a Metaltron.  Only when The Doctor sees it does he realize what it truly is – a Dalek, which somehow survived the Time War and fell back in time to Earth, damaged and alone.  The Doctor immediately tried to destroy it, but Van Statten, not wanting his most valuable item damaged, stops him.  But when Rose tries to reach out to the creature, touching it, the Dalek is able to user her DNA, charged with the energy of time travel, to restore its systems.  In seconds it breaks free of his chains, absorbs the power grid of the western United States, and downloads the Internet, searching for information about his people.  Finding nothing, it resorts to the primary command of all Daleks: exterminate.

Pretty much as soon as the new show was announced, questions came up as to when the Daleks would appear.  The show was shot into the stratosphere once the Daleks appeared, and they’ve been linked inextricably ever since.  The Daleks almost didn’t make it to the new series of Doctor Who, and it was all Steve Martin’s fault.  When he was to appear in the film Looney Tunes: Back in Action, he insisted they include a Dalek in a madcap scene full of old movie aliens.  He was a big fan of the series, and thought it’d be a nice tip of the hat.  Permission was asked, but the estate of Terry Nation, who controls the rights to the characters, was not.  This caused offense, so when the BBC asked to bring them back for the new series, the estate originally refused.  When Steve Martin heard about it, he wrote a personal letter to the estate explaining the situation, and apologizing personally.  This calmed everyone down, and the proper paperwork was signed to allow the characters to appear.  But for about a month, Robert Sherman was forced to work on a draft of the script with another alien.

The new Dalek was designed to match the height of Billie Piper, so she could look it in the eye.  Similarly, the New Paradigm Daleks were designed to match Karen Gillan’s eyeline.  But in a recent interview on the BBC website, Steven Moffat wonders that making them too big was a mistake. “They’re scarier when they’re wee”, he says.  The scene of the Dalek at the bottom of the stairs was a clear reference to the classic gag about not being able to climb stairs. But of course, in the original series, Daleks had found a fix for this long since. They had anti-gravity mats in Planet of the Daleks, but the big reveal in Remembrance of the Daleks as the Imperial Dalek slowly floats up the stairs was the scene that had fans laughing and squeeing.

Nicholas Briggs, the voice of the Daleks, got his start working on fan productions and the Big Finish audio dramas.  He’s also provided voices for the Cybermen, the Nestene and the Judoon.

Eccleston played the episode as positively bloodthirsty.  After several episodes of offering the aliens a chance to leave in peace, he does not hesitate to try to kill it.  His rage at the Dalek, and later at Van Statten is a sight to see.  Billie Piper has equally good scenes against the Dalek from the other side of the spectrum, trying to help the unstoppable tank who is trying to get the hang of feelings.  This could have been a perfect final Dalek adventure, but as you’ll see, they’re far from gone.

There are a lot of parallels between this episode and the first of this season, Asylum of the Daleks.  Both this Dalek and the tragic prisoner in Asylum are kept in chains, and both are more than a little conflicted by being a mix of human and Dalek.  Both are capable of amazing destruction all on their own, even as far below the surface of their respective planets.  The idea of human and Dalek hybrids has been a theme as far back as Evil of the Daleks, where The Doctor introduces a “Human Factor” into a number of Daleks to start a civil war between factions.