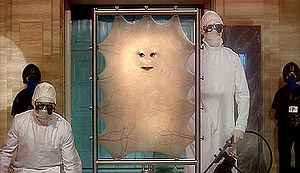 Using the new Doctor Who Limited Edition Gift Set, your noble author will make his way through as much of the modern series as he can before the Christmas episode, The Snowmen. Travelers are advised against the use of weapons, teleportation, and religion.

In this episode, it looks like it’ll be a fabulous evening’s apocalypse, but The Doctor and Rose find out that there’s a chance they may be in danger during…

Rose wants to visit the future – The Doctor takes her to the year 5.5/apple/26, five billion years on, the day the Earth will be destroyed by the sudden expansion of the sun as it dies.  Humanity has long since moved on throughout the galaxy, and the death of their homeworld is seen as more of a celebratory experience.  Platform One, a massive force-shielded spacestation is the floating ballroom for a huge party to watch the planet get the finger, and that’s where Rose and The Doctor have landed.  Enjoying the opportunity to hobnob with extraterrestrials, Rose begins to notice that some…THING is wrong on Platform One.  The force fields are brought down, and Lady Cassandra stands revealed as behind a plot to put everyone in danger solely to collect on a massive compensation suit.  As The Doctor says, five billion years later, it all comes down to money.

We’ve seen in the first episode how well the new Who crew can do a story set on Earth, so they chose to impress us quickly and go big with a quick trip into the future.  A wide assortment of wonderful makeup, mechanical effects and CGI provide a solid and believable experience, with no “wobbly sets” as they playfully reference in the commentary and on confidential the occasional cheesiness of the original series.  Davies keeps a good balance of the dramatic and the silly here.  Billie Piper gets some great scenes as she comes to grips with the fact that she hopped into the proverbial car with a total stranger, and stands a severe chance of getting burned over it. Literally.

There’s quite a few first appearances in this episode.  In addition to recurring characters like the Face of Boe and Cassandra O’Brien, it’s the first appearance of the Psychic Paper. Another brilliant little idea to explain how easily the Doctor can get into any situation so smoothly, it’s a tool that’s rapidly become as commonplace and popular as the Sonic Screwdriver.  It’s also the first time a running concept was used clearly – when the TARDIS travels into the future, the Time Vortex is red, when they travel into the past, it’s blue.  When Tennant and Smith take over the role, that color theme carries through to their costumes – check the colors of Ten’s outfits, and Eleven’s bowtie.  And assuming you already know how the season ends, you might notice this is the first mention of “Bad Wolf” – two aliens are chatting, and one mentions that this is “The bad wolf scenario”.

Davies starts another tradition going here as well – spectacular characters who appear once alone yet appear fully formed.  Jabe of the Forest of Cheem is the first person to sacrifice herself to help The Doctor,  She’s also the first to reveal a bit more about the Great Time War. It was mentioned in the previous episode; the war was the reason the Nestene food planets were lost, and The Doctor admits he couldn’t stop it.  But here we learn that the rest of the Time Lords are gone, and his world is destroyed.  The details are yet to come, but it’s a major departure from the previous series.  The Time Lords were always seen as unassailable, undefeatable.  For them to fall shows that no one in the universe is infallible.  And that carries through to The Doctor.  In the new series, he makes mistakes, and sometimes those mistakes put people in danger.  It gives the Companions a chance to save the day, and generally increases the sense of drama: The Doctor will not always have the answer.