The Rocketeer Comes to Blu-ray for Christmas 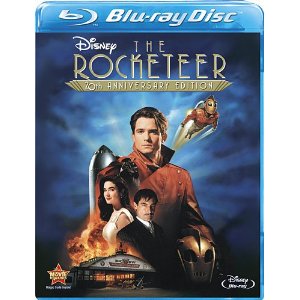 In the wake of his success with Captain America: The First Avenger, there’s little surprise that Marvel’s owner, Disney, is releasing the Blu-ray edition of director Joe Johnston’s earlier comics adaptation, [[[The Rocketeer]]], on December 13. The underrated film was released 20 years ago and was a faithful adaptation of Dave Stevens’s homage to the serial heroes of the 1930s.

Starring Billy Campbell (The OC, Enough), the movie also featured early work from Jennifer Connelly (Blood Diamond, The Dilemma) and also starred Alan Arkin (Little Miss Sunshine, Get Smart), and Timothy Dalton (The Tourist, Chuck). The movie was written by the team of Danny Bilson and Paul De Meo, who went from this to adapting The Flash for CBS.

The press release from Disney says the film has been given state-of-the-art digital restoration and enhanced high definition sound. Unfortunately, the lack of bonus features in the announcement is cause for concern.

For those unfamiliar with the concept (shame on you), here’s the official synopsis: The discovery of a top-secret jetpack hurls test pilot Cliff Secord into a daring adventure of mystery, suspense, and intrigue! Cliff encounters an assortment of ruthless villains, led by a Hollywood screen star who is a secret Nazi spy. With the help of his actress girlfriend, the young pilot battles enormous odds to defeat his foes who are anxious to use the device in an evil plan to rule the world. The dangerous mission transforms the ordinary young man into an extraordinary hero.