Making the same move for new Companion Adam he did for Rose, The Doctor takes the trio to the year 200,000 – the middle of the fourth great empire, mankind at its height.  So when everyone seems to be not a lot further up the social advancement scale than the 20th century, he suspects something’s wrong.  Someone is trying to change things, very slowly, playing…

“Time travel’s like visiting Paris; you can’t just read the guidebook, you gotta throw yourself in. Eat the food, use the wrong verbs! Get charged double and end up kissing complete strangers! Or is that just me?” 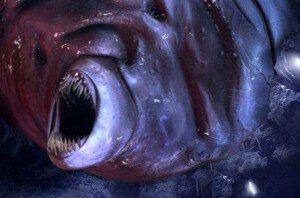 The Doctor and co arrive on Satellite Five, news center for the empire, streaming information from everywhere, to everywhere. Journalists and techs are all angling for promotion to Floor 500, where it’s said the walls are made of gold. They’re off by one letter – it’s deathly cold, to ensure the health of the mysterious “Editor-in Chief”, the Mighty Jagrafess of the Holy Hadrojassic Maxarodenfoe. The Jagrafess has been stunting the advancement of the human race, keeping them from achieving its potential.  His assistant, played with style by Simon Pegg, works for a consortium of banks who are manipulating the news, and as a result, the people, to make things better for their investments.

And meanwhile, new companion Adam has decided to take advantage of the opportunities that access to 198,000 years of future history can provide, and attempt to download enough info to make his former employer look like the owner of a lemonade stand.

A simple done-in-one episode with a strong message and a solid monster, It’s a great example of how much Russell could get into his stories.  The set is both well designed and very efficient, budget wise – a bit of redressing and it takes the role of several separate floors.  And it’ll return later in the season as the plot threads of the season start to get tied up.

Russell T Davies made a running gag of the alien and planet names getting progressively more complex, all culminating in next season’s “cheap episode”, Love and Monsters, where the baddie is from the planet Clom.

Simon Pegg is the first big name to appear in the series, the first of a still-growing list who are all too happy to become a part of the show’s history.  Simon also narrated the first season of Doctor Who Confidential.  While she’s not as well known in the US, Tamsin Greig is a popular comedic actress in the UK. She recently played Sacharissa Cripslock in the two part mini-series Terry Pratchett’s Going Postal.

Interestingly enough, in an earlier draft, Adam has quite a different reason for doing the old Back to the Future Sports Almanac trick.  Originally, it was written that Adam’s father has a disease of some type, and he tries to access medical information in the hopes of saving him. It’s an interesting idea, but for The Doctor to take the information away and chuck him out of the TARDIS in punishment would make him the jerk.  It’d be warranted for breaking the laws of time and space and all, but it would still come off as a dick move.  The idea that he simply wants to profit works much better, and it shows that once again, this new Doctor is not infallible.