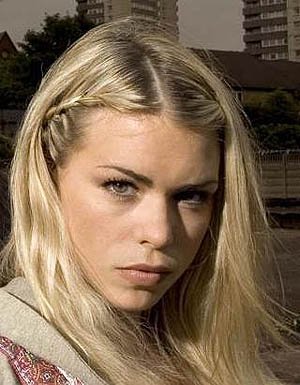 Using the new Doctor Who Limited Edition Gift Set, your noble author will make his way through as much of the modern series as he can before the Christmas episode, The Snowmen. Come along.

Shop girl Rose Tyler was not expecting much to change in her life.  In a very brief time, she faces down animated plastic shop dummies, teams up with a 900 year old time traveler, and helps save the world.  There’s no doubt why the episode was named after her…

“Nice to meet you, Rose; run for your life!”

After a long dark silence, peppered only with books, audio adventures, comics, magazines and…well, ok, but no new TV adventures, Doctor Who returned to the air with a lot to prove, and not a lot of time to do it in.  Russell T. Davies had to grab the new audience, and at the same time, assure the old fans that the show was in good hands.  He achieved it all brilliantly.

Billie Piper as Rose Tyler is very much a new style of Companion for The Doctor – sure of herself, independent, and much more likely to fight than to scream.  We also see another change to the companions; we meet her family and friends.  The glorious Camille Coduri as her Mom, Jackie, and her boyfriend Mickey as played by Noel Clarke are different from other Companion’s family in they’re not dead, usually killed by the monster of the week, if we see them at all.  They give Rose more of a grounding; she’s happy to go off and explore the world, but there’s people waiting for her at home, and that naturally brings them back to Earth often, something that doesn’t hurt the budget.

And at the center, Christopher Eccleston as a very different and modern Doctor.  His clothing is nondescript, his manner gruff, his opinion of Humanity seemingly dismissive, but when he speaks in their defense, it’s clear he loves them.  His tongue is sharp; his first few lines to Rose are delightful, telling her to go off and eat her beans on toast, but congratulating her for coming up with a logical explanation for what she’s seeing. But shortly later, he gives a peek at the emotion he’s feeling every day, about he can actually feel the planet spinning under his feet.

Davies and co chose well for the series first villain; the Nestene Consciousness and its plastic commandos the Autons.  Only seen twice in the original series, they were obscure enough that it’d please the fans, but easy enough to explain to the newcomers.  From the dramatic scenes of gun-handed mannequins taking people out left and right in a mall to the ridiculous scene of Mickey getting kidnapped by a garbage bin, the show did what it always did well – take commonplace things and make them scary.

In this episode’s commentary, we hear about how they chose to keep the first appearance of The Doctor very underplayed, as opposed to giving him a big dramatic entrance. Also, the episode ran sort of short, and the scene with The Doctor talking about how he can feel the rotation of the Earth was added later, and then re-shot, as Chris decided he could do it better. One of the few times they had time to re-shoot something for quality.

The episodes of Confidential on this first series are the edited versions that appeared later on the website and other locations, not the full half-hour version that were run after the original broadcast.  They’re still quite interesting to get a look at how the show was put together.  It’s interesting to see the interviews with Chris Eccleston, both here and in additional extras on the disc.  Remember by this point he’d already decided to leave, they’d already filmed the whole series, and they already had his regeneration in the can.  But he’s happily giving these interviews, talking about what a joy it was, and gamefully smiling and nodding when asked how long he plans to stay with the series.

In one episode they do a perfect job of reintroducing the character to a new audience.  It was kept simple, but let everyone know the show was very much to be taker seriously. The special effects were very much up to modern standards, and the writing of Davies did not talk down to the show’s traditional primary audience of children.  Like it had been before, there was no guarantee the show would fly, but it got a damn fine running start.