A Doctor A Day – “The Impossible Planet / The Satan Pit”

Humanity’s natural response to the order “no” is “why?”  Put up a sign marked “wet paint”, and count all the people who touch what it’s hanging on.  And if you bury the devil, it’s a poor idea to put him on… 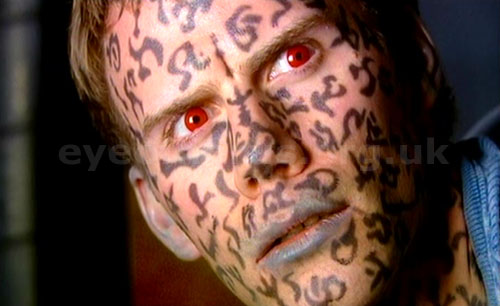 The beast cannot escape his prison, but his mind can, and successfully takes over one of the crew, as well as its stock of alien slaves, the Ood.  While The Doctor spelunks down to the cavern in the planet’s core, Rose and the crew fight the now quite violent Ood in the station.  The Doctor is left with a terrible choice – destroy the beast’s prison and doom Rose, or let her and the crew escape, along with the beast’s mind.

A very moody episode, with a well-designed set that allowed for lots of corridor runs and corner turns.  The Doctor even comments at the beginning that a lot of these bases look the same, and are made from kits. It’s got a very haunted house feel, which is basically what the classic sci-fi film Alien is, as are all tributes to it. The Doctor gets a number of very nice speeches about how amazing humans are, boldly rushing in where angels fear to tread, and wanting to do things solely because they’ve not been done yet.  It’s a recurring idea for the Doctor, interspersed occasionally with his comments about how blind and small-minded they are.  We’re clearly his favorite race, and not simply because humans are cheaper to portray in a TV show.

It’s the premiere of another new recurring alien, the Ood.  They return a few time over the course of the new series, including a much more Ood-centric story in the Donna Noble season. The Ood are played as an unintelligent hive-minded race here, a “perfect slave race” as they’re described, and there’s simply no time for the story to address that.  Rose makes a passing comment about it, but it’s quickly waved off, especially after they went all red-eyed and scary, and could be classified as a threat.  It’s not until the next Ood story do we get a real idea of their situation, and a more proper addressing of their status as slaves.

An Ood appeared in Neil Gaiman’s story The Doctor’s Wife, mainly because they didn’t have money in the budget to make a new alien.

While The Doctor had never met the devil himself before, he’s come close.  The Demoniacs, Sutekh, and other races were believed to have interacted with humanity  in the past and give it the idea of devils.  Tom Baker was supposed to have fought the devil, in the guise of Scratchman, in a film written by Baker and Ian Marter titled Doctor Who meets Scratchman.  It had a mad throw-everything-at-it plot, but never got past the talking stage.