A Doctor A Day – “The Unquiet Dead”

Using the new Doctor Who Limited Edition Gift Set, your noble author will make his way through as much of the modern series as he can before the Christmas episode, The Snowmen. This is not a mere shadow play.

If you want to get picky, this is a Christmas episode before they started doing them officially.  On Christmas Eve in 1869 Wales, The Doctor, Rose and of all people, Charles Dickens, join together to fight…

THE UNQUIET DEAD
By Mark Gatiss
Directed by Euros Lyn

“In what way do you resemble a means of  keeping oneself cool?”

Having shown her the future, The Doctor plans to show Rose the past.  Aiming for 1860 Naples, they land in 1869 Cardiff. Now, as a rule, the TARDIS doesn’t land where there’s nothing going on, and this was no exception.  At a local funeral home, the dead are rising again, and at an increasing rate.  This evening, an old woman rises and continues on with her planned events of the day, which included a trip to the theater to see Chares Dickens live.  This causes some consternation at the theater, which draws the attention of The Doctor.

Apparently it’s been happening from some time.  But they’re not ghosts, but aliens, known as the Gelth, a gaseous lifeform who inhabit the bodies of the dead as temporary accommodations.  Falling through a rift in spacetime, conveniently located in the basement of the funeral home, their request is simple – let them use the bodies of the recent dead so they can survive.  But like so many times before, the aliens beg for an inch, and they want to take over.  A simple chambermaid is the key to both their arrival, and their stopping. 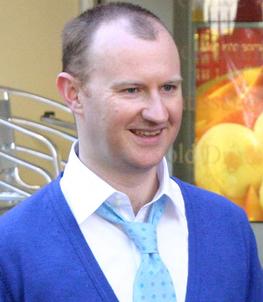 Second only to Moffat (who will be joining us in a day or two), Mark Gatiss is the writer who is the closest to being genetically bred to write Doctor Who.  Writing for many fan productions and acting in a couple as well, he brought decades of love for the series to the table, and his story is both a great Victorian adventure as well as a solid and emotional Doctor Who script.  It’s peppered with tips of the hat as well, from the Dickensian name of the mortician, Sneed, and the door knocker that takes on a ghostly visage as the Gelth pass through it.  And not to mention the idea that after seeing a series of ghosts on Christmas Eve, he’s inspired to change his life. One of the extra’s on the disc is a video blog of Gatiss talking about the process of writing the script, from the first meeting on.  It’s interesting to hear about early ideas for the story, not to mention how seriously he’s taking the idea of bringing back a show he loves so much.  A big moment includes a gang of four including Rob Shearman, Paul Cornell, and Steven Moffat, before and after the first readthrough. The level of suppressed glee among the four is priceless.

Simon Callow, the prominent stage and screen actor, is possibly more associated with Charles Dickens than any living performer.  Appearing as the writer in several different works and media, he hesitated at playing the character in Doctor Who, fearing it’s be a simple cameo or camp parody. Only after reading Gatiss’ script did he agree, realizing he’d done a stellar job of getting Dickens’ character right.

This is also the second episode in a row where Rose talks to the service class folks, as equals.  She has a nice conversation with a plumber in Platform One, and with Gwyneth here.  In both cases, she gets them to open up a bit about themselves, and both seem quite appreciative to get a chance to just chat.  Interesting that things don’t change much in five billion years – people don’t notice the help.

Once again we see that this is a very different Doctor from before.  While everyone sees the idea of “spirits” taking over corpses as anything from shocking to blasphemous, The Doctor sees as perfectly reasonable, an extreme form of recycling.  His practicality is…well, alien. Of course, the emotional response when he hears that once again, this is a race almost destroyed by the Time War, named for the first time here, colored that choice. And once again, he makes the wrong choice, and as a result, people die.  That takes some getting used to.

Three episodes in, and we’re already starting to see the beginnings of the spinoff series, Torchwood.  Eve Myles plays Gwyneth, the maid and assistant to the funeral home.  Centuries later, her descendent (well, not HER descendant, clearly) Gwen Cooper will become a policewoman and become involved with the mysterious organization.  Russell T Davies referred to Myles as Wales greatest hidden treasure, and begorrah, he’s not far wrong.  This episode also introduces the rift under Cardiff, a source of extradimensional energy that will return as a plot point for both series, a fuel source for the TARDIS and a source of McGuffins for Torchwood.