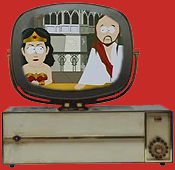 The thing about a great story is that it can be told so many different ways. That includes the Greatest Story Ever Told and, at this festive time of year, my mind turns to the Christmas Story. I recently had a flash of (possibly divine) inspiration: how would it work as a sitcom?

It would focus on a middle-aged Jewish carpenter named Joseph back in Roman times. I’m thinking Tim Allen for the part. He’s got this hot young fiancée named Mary (Megan Fox?) who is saving herself for marriage but then winds up pregnant – and not by Joseph. Well, Joseph’s all set to break off the wedding when he gets visited by the Angel Gabriel. I’m thinking Morgan Freeman or possibly Chi McBride (who was so good in being the smart butler to a daffy, horny Abraham Lincoln in “The Secret Diary of Desmond Pfeiffer” that aired for about three heartbeats back in 1998).

So the Romans order a census and Joseph has to go to Bethlehem, the city of David (because he’s descended from David) and get counted. Mary’s “great with child” which means she’s about to give birth at any moment. Maybe they got a late start, maybe Mary can’t move so fast or has to stop often, but by the time they get to Nazareth, everything is booked up. Lots of room for comedy there. One innkeeper (I’m thinking Richard Lewis, although Richard Karn who was in Home Improvement with Tim Allen could do it and audiences might like that) agrees to let them sleep in the barn out back.

Nowhere in any of the gospels or anything else I could find mentions a midwife. You think you would. Mary’s midwife would be a pretty important role. No mention. So – who has to do it? That’s right – Joseph. Tim Allen as Joseph. Can you see it? Alpha male having to deal with childbirth? Tons of humor to be mined there.

So while Mary is screaming and Joseph is ready to faint, Gabriel shows back up. He waves his fingers, Mary’s labor pain goes away (Gabriel claims it’s a divine epidural) and then – lo! – a great light shines ‘round about them coming from Mary’s womb. Enter Jesus.

I’m going to take a little artistic license here and suggest that he’s like the eTrade baby or the babies in the Guess Who’s Talking movies. The adults don’t react but it lets Baby Jesus comment on what’s going on. I always found young Jesus to be a little snarky, what with the “Don’t you know I’m supposed to be about my father’s business?” Jesus can play all sorts of tricks on Joseph, too, like change his wine into water.

In addition to the Innkeeper, there’s all sorts of wacky characters who can be brought in – shepherds wandering the fields at night, three Wise Men bearing gifts (maybe Joseph has to convince them that Jesus is the child they are seeking), and Mary’s Cousin Elizabeth can come for a visit (is it too much to hope for Carol Burnett? And maybe Tim Conway could play Elizabeth’s husband, Zachariah.).

I was contemplating the title. Modern Family is a popular show so I was thinking Ancient Family or Holy Family, but that doesn’t catch the flavor. I think Sweet Jesus! works. It could be pitched to the networks but HBO or Showtime might be looking for an edgy comedy. Or we could get Seth McFarlane interested and take it over to Fox. He’d animate it. Bill O’Reilly could denounce it on his show and when he cuts away for a commercial, there’s an ad for Sweet Jesus! I love it.

So, what do you think, Hollywood? I think we have a winner here. Have your people call my people. Wait. I don’t have people. Maybe Michael Davis could be my people; he’s always putting together deals. Hey, Michael – want to be my people?

And as Tiny Tim was heard to say, “God bless us everyone!”