Another April Fool’s Day has come and gone, leaving in its wake a trail of confusion as comics news sites posted fake news article after fake news article in an attempt to hoax their audiences into believing things that couldn’t possibly be true.

Naturally, ComicMix condemns all such shenanigans as juvenile and unworthy.

All the same, now that we’ve had a day or two to process, there have been six recent happenings in the comics world that stood out as so weird, so unlikely, that we were completely floored when they turned out to be true. But don’t take our word for it, take a look below. 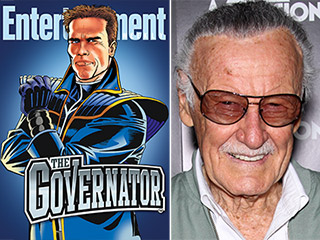 Stan Lee and Arnold Schwarzenegger are teaming up for The Governator, a comic and TV show detailing the adventures of the ex-Governor of California, ex-King of Aquilonia as he teams up with a precocious pre-teen hacker to fight crime. This is a thing that’s going to happen. Not a joke. We couldn’t believe it either. You’d think after Peter Paul and the Clintons Stan would stay clear of politicians.