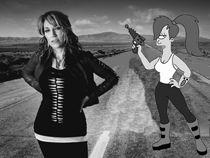 At last, some fans will be fulfilling their fondest dreams as Futurama’s Turanga Leela does her long-awaited guest turn on Sons of Anarchy.

The focus of the story arc will involve Leela being commissioned to bring notorious biker-mama Gemma Teller Morrow to justice. Gemma doesn’t appreciate the attention, and of course SAMCRO comes to her defense. Out-gunned, Leela is aided by Bender and Fry in a bloody fight to the finish with Gemma, Jax and Clay.

After years of negotiation, it finally occurred to producers that both shows are distributed by divisions of 20th Century Fox and this crossover will inure to the benefit of their corporate coffers. Merchandising will abound, with Leela imagery under the Sons of Anarchy logo showing up on various Harley-Davidson products.

As exclusively reported last month on ComicMix, Futurama has been picked up for a 13-episode season in 2012 – its eighth – following a similar commitment that begins in June of this year. Sons of Anarchy will begin its fourth year at the start of the “traditional” television season this coming fall.