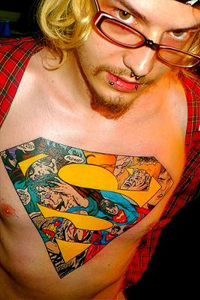 In a startling move to control images of their copyrighted characters, lawyers for Warner Bros Entertainment, parent company of DC Comics, have begun issuing cease and desist orders to fans sporting tattoos featuring DC characters. While walking the floor of last month’s C2E2 in Chicago, several fans were handed official looking documents citing that they were in violation of DC’s copyrights– over their tattoos.

“It is unlicensed artwork. And like any bootlegged material we are going to come down against it. We see it as no different from t-shirt or other paraphernalia” said one of the WB lawyers.

Many comic book conventions, including ReedExpo’s New York Comic Con and C2E2, feature tattoo pavilions showcasing tattooists and their art. Wizard’s Chicago Comic Con has also welcomed tattoo artists onto their floor, encouraging fans to show off their ink or get some at the show.

“I guess I’ll have to wear long-sleeved shirts when I go to cons now” said one fan after getting a c & d order. He is close to finishing a Justice League themed sleeve on his left arm. “I’m not going to stop or get it covered up. It’s how I chose to express myself as a fan!”

This comes at a time when tattoos have become almost accepted in mainstream culture and as comic book movies are big budget blockbusters. And it looks like Warner Brothers has spotted a money making opportunity.

“We will be unveiling a line of official DC Comics Tattoos at this year’s San Diego Comic Con. Tattoo shop owners will be able to purchase these pages of tattoo flash for their shops and offer their clientele officially licensed DC Comics artwork.