The Un-Ethics of Watchmen, Part 1: A Bird’s-Eye View 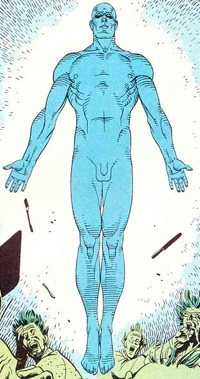 Editor’s note: With the imminent release of Watchmen, we thought we’d try and get a different perspective. So we asked Alexandra Honigsberg, a professional ethicist and genre author, to read the book for the first time and delve into the ethos of the world created by Alan Moore and Dave Gibbons.

If super-hero comics are the literature of ethics, then Watchmen is the literature of un-ethics. It is the template for what not to do and makes Batman look like a Boy Scout, even at his darkest Dark Knight. They make Dirty Harry look clean. There’s a new saying on the street that Bitch is the New Black, it Gets Things Done. Well, these guys and gals are certainly the biatch. But is there any way to redeem their actions so that the ends justify the means? Or, more importantly, that even the most inhumane or inhuman retains some sense of what it means to be human?

The study of ethics is the exploration of the good life and how to live it. Now by the “good life” I don’t mean the bling life. I mean a life that is honourable, virtuous and, on a profound level not shaken by the winds of change, happy. Happiness (or pleasure or joy or The Good). That’s the end, the ultimate goal, or what Aristotle calls “that at which all rational beings aim.” Ari makes a fine distinction between the acts of a man (animal, non-rational) and the acts of a human (rational) or what some of us might term the mensch (gender neutral). One of the biggest invectives that Laurie hurls at Dr. Manhattan/Jon Osterman is that, after working for so long in the lab and being so all-powerful (the man not only to end all wars, but end all worlds), he ceases to be human. Moore emphasizes this with quotes from Nietzsche, who claims that when we become evolved enough we will not need rules, we will have become extra-moral – the superman (not the Nazis’ bastardization thereof) who has no need of ethics as we now know them. But are we still human? Extreme means change the agent and therefore change the end (e.g., The Comedian’s total amorality). Can we still give a damn if we’re all god-like? Or in the midst of so much horror that no human could reasonably be expected to survive unscarred (think of the Holocaust), are we still human? What’s human? What’s life? What’s good and who decides? Who gives authority to whom and why?

Alan Moore, like ancient thinkers before him, sets things in the city because there’s more humanity there, it’s neutron-star dense, more raw material to work with– think of the Bible’s Jerusalem or Aristotle’s Athens. And thus he paints a world that is a horror, and characters that are really hard to like. But finally, about 5 issues from the end, he made me give a damn. I won’t totally spoil the ending, and the movie’s ending is not the book’s. I’m led to understand that the movie will focus on the major premise – who’s killing the masks and why? And therein lies our major ethical dilemma, because all good stories have them – it’s what makes the story human. We, as humans, make ethical decisions every day – judgment, discernment, choosing what’s right and wrong, not just for ourselves, but for all “civilized” people. Universalism. Moore’s society is not civilized. His is Hobbes’ pessimism (give up some personal freedom to protect yourself from the tyranny of fear due to the predatory among us) on steroids – men of reason don’t prevail, but men of un-reason or very different reason (the women, alas, have relatively little say, despite their presence). We’ve won Vietnam, Nixon’s still president in ’85, and WWIII is upon us.

You’ll notice my repeated usage of words such a “reason,” “reasonable,” and “rational.” Ethics is dependent upon thinking things through – whether that thought takes lifetimes or a nanosecond. And thinking is as much a conditioned response as it is a reflexive one. You can’t be ethical if you don’t take the time to contemplate your actions (hence cometh the crime of passion). Certainly the very scientifically minded amongst the masks – Osterman, Veidt, Hollis, Dreiberg – give things a lot of thought. Thought bespeaks voluntariness, which says choice, which then carries with it responsibility (e.g., Peter Parker’s, “With great power comes great responsibility”), praise and blame. We see very little evidence of these guys worrying about praise and blame, even the most thoughtful and brainy of them. Even in thought, they are men and women of passion. And the most brutal, the most amoral among them, the most damaged goods – Kovacs and Blake – display very little thought at all.

And chaos ensues (back to Hobbes – men of reason without rules equals the natural state, but too risky, because someone will always be unreasonable!). 24’s Jack Bauer shows human suffering for the pain he causes in the name of the greater good – he’s lost parts of his humanity and he knows it and he mourns it. But not these guys. They’re not very reflective. If you’re more brutal than the criminals, there we are back to changed agent, even if you’re employed by the so-called “good” guys (our own government). The act of objectifying others via brutality reduces the agent’s humanity until they, too, become an object and then who’s objectifying whom? Certainly the masks all felt used at some point – by their agent, the media, the public, the government, their parents, their lovers, each other. They are instruments, tools, when they renounce reason for mere reaction in any sense – allowing themselves to be used for the sexual high of combat or costumes or all of the above, when they rationalize things away to be able to live with themselves (the Japanese cover this very well in Death Note and Full Metal Alchemist).

In some ways, Osterman is the most used after his accident and loses the most of his humanity and yet, somehow, manages to do some good (though I would argue with his ultimate decision to stay silent in the face of a shocking evil, even with a good intent, at the end). But just when Osterman is about to stay isolated and spectacularly inhuman on Mars, the revelation to him of Laurie’s genesis makes something click for him and the sense of wonder – that sine qua non of all literature of the imagination – allows him to give a damn, to move from indifference to make a difference, and return to help save the Earth and humanity, because it allows him to see what he calls the “thermodynamic miracle”: life! Each uniquely autonomous person, as Kant says, is the ultimate improbability and thus the ultimate miracle of great worth, even to a non-religious scientist (no one has religion in this world).

It is an ethical maxim that you cannot use a moral evil to create a moral good. You cannot use a moral evil to cure a physical evil (e.g., kill someone to get their liver to do a liver transplant to save someone else – every life is equal: back to Kant). The final solution to save the world that the surviving masks come up with has such a great cost that can it really be considered a solution, or just one more massive moral evil? Like Socrates drinking the hemlock rather than compromising the principles he’d taught for 80 years, are some things worth dying for, as a person or as a race, despite our hard-wired survival instinct? No ethicist worth anything would go along with the ending of this story and even the most pragmatic of pragmatists or moral relativists would find it pretty hard to take. The masks have a problem with it but, in the hurried fashion of this ending, seem to accept things as they are, admit defeat in harsh victory. Things can’t be undone, but they can choose their reactions to it and they choose silence – are we back to the Holocaust, where inaction is as damnable as wrong action? They move on, get back to some semblance of a “normal” life, being human, not masks, just folks.

As the blood on the clock illustration that begins each issue starts to obscure time, that much bad can never be washed away by any amount of good. It obliterates everything. Out, Out, damned spot! Is the spot our humanity and, with it, our ethics? Can we ever really have the good life if we jettison our humanity and life itself in order to pursue it? Or does our definition of “the good” and even “life” become so alien that we now, as mere mortals not yet evolved into supermen, could not possibly understand where we will be once we’ve evovled?

In some ways, the Watchmen and Moore seem to say that it is, that the end does justify the means, that if you have to sacrifice and amputate most of a human self, then go ahead, have the cajones to do it, go for the gusto, become Nietzsche’s supermen at all costs. It is your destiny.

Ethics is the science of ideals, a philosophy of seeing what is and striving for what could and should be, at its best – hope. Moore’s is not a hopeful message. And as Harvey Milk said, “Ya gotta give ‘em hope!”

Next week in Part II: Character Sketches – the under-uber-mensches!

Alexandra Honigsberg is an adjunct professor of Ethics at St. John’s University and a corporate Ethics consultant.  A lifetime native New Yorker, she is a professional violist, a genre author (see Phil Brucato’s Raven’s in the Library anthology coming out in March), and works internationally on interfaith dialogue between clergy and businesspeople of all faiths, recently returning from a diplomatic mission to Turkey (summer ’08).