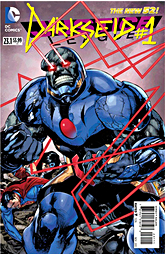 There’s a great website I stumbled on (thanks, Nick!)… hasdcdonesomethingstupidtoday.com. Strange, but a subsequent Google search did not turn up any similarly named sites for Marvel, Image, Boom!, Dynamite, Avatar, or Dark Horse. To be fair, I didn’t search that hard. But I think the point is fairly straight forward. DC can’t get a win to save their lives these days. The worst part? There’s no silver lining to the clouds. No distant light off towards the horizon. Just bleak, bleary, predictably banal gimmick after gimmick.

First up? This summer, DC unveils its first epic-mega-crossover since the New 52 was unleashed with Trinity War’! Now, I’ll be fair: It appears this crossover is contained only to Justice League, Justice League of America, and a handful of character-specific tie-ins and mini-series. So, hey, it can’t be that bad, right? Well, according to a hype piece from Newsaramal, I could probably lay waste to the remainder of this column picking it apart. But I digress. No need to get too assy too quickly. You know what, I completely forgot! It’s get assy fast month here at ComicMix. Sorry, kiddos. I have to!

Once again, the whole shebang will start off with a death of a major character. Straight out of the gate, Trinity War aims right for the most predictable plot point to churn up the drama. Even if it’s handled as beautifully as, say, Ted Kord’s demise a few major crossovers ago… it’s still old hat. Combine this will all the preview art throwing all Justice-level leagues into a fracas. I’m sorry, it may be “new” in the New 52, but I’m terribly sick of heroes fighting heroes. While the JLA was formed specifically for this, having it come to a head amidst what will likely be a by-the-books tete-a-tete just seems like brilliantly lazy plotting. Maybe I’m wrong. I want to be wrong. But nothing suggests I am.

And beyond that? Well, one gimmick deserves another. DC announced that following in the aftermath of the Trinity War, the world will largely go unprotected. While Marvel apparently has the same thing happening in their Infinity crossover… seems Luke Cage was smart enough to stick around and make himself a make-shift mini-series. I mean team. So, Trinity War will begat Villains Month. Just as DC went back to all issues 0s a year into the New 52 (yet another immensely successful artifice – successful in having me drop five series simultaneously…), so too will all of DC’s publications be taken over by villain-specific issues, and a glut of mini-series.

On paper (pun not intended, oddly enough), this actually sounds pretty interesting. I’ve long felt DC has trumped the House of Mouse when it came to the quality of their ne’er-do-wells. Giving them the spotlight could be an interesting move. But taken at the mass quantity of 52 one-shots, and three five-issue mini-series? It’s overkill. So much so, that as a reader? I outright can’t afford to enjoy the glut of the releases. Whatever market research DC did that proves its fanbase can purchase 55 issues in a single month (and likely forego all other comics in said month…) is as skewed as their also-announced 3D motion covers. Wait. What? Yeah.

In a bold move, DC will debut 3-D motion covers on their villainous volumes. I say bold because silly, a waste, novel-at-best, or dumb-dumb-dittay would be too mean. Feel free to peruse a few sneaky-peaks, and tell me how they come across to you. Just as I’d thought we moved past holofoil, gatefold, reverse-colored, and secret-message-hidden-between-the-lines-if-you-look-close-enough covers… the industry I love so much chooses to continue to deluge the marketplace with wastes of ink and paper. I’m all for a striking cover image – don’t get me wrong – but every aforementioned stunt does nothing for me as a fan. Never once in my fandom have I purchased a comic because of a special cover. While I know there’s a variant collectable market… when your entire line is being fitted with such an over-the-top Look At Me! construct? It reeks more of desperation than celebration.

As Marvel continues to dominate the sales charts and Image continues to win the hearts of all who seek originality, DC seems to be thrashing on the deck of the USS Fanboy. What hurts the most is that so much of it could be prevented. Long before the New 52, in between too-many crossovers and events, was a line of comics that knew that their strength came through solid runs and potent creative teams. At the end of the day, when we fans describe those “must read” moments of our favorite characters, it’s few and far between where you’ll find us reflecting on the machination of the month.

When DC can return to just telling great stories that depend on nothing more than the power of their brands… they’ll realize they don’t need anything else to be successful. And that my friends… is no gimmick.