[EDITOR’S NOTE: In previous editions of ComicMix Six, our contributors have given you their lists of comics’ top political campaigns, the best and worst movies based on comics, and even a few reasons why a Skrull invasion isn’t anything to worry about.

This week, we have a special guest contributor, Vinnie Bartilucci, whose name can often be seen in the comment sections here on ComicMix. We thought he had a great idea for this week’s list, so without further introduction… Take it away, Vinnie! -RM]

Comics work fine all by themselves, in their own little universe. But at some point, just like on television, someone always says, “Hey, let’s bring in a guest star!”

Maybe it’s because the star in question is a comics fan, or they thought it’d bring the book some publicity if the star help it up on The Tonight Show, or any of the other inspirations that come after a late night of pacing the floor with a stomach full of pastrami. But the real world and the world of comics clashed a lot of times over the years. 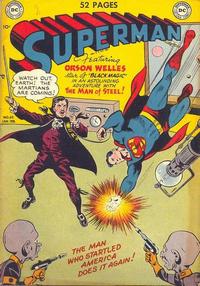 Sure, comics creators would often put themselves in the books – Julie Schwartz made more than a few appearances in the DC titles after the discovery of Earth-Prime, and Stan Lee almost deserves his own ComicMix Six for all the times he appeared in the books. Bob Hope and Jerry Lewis even had their own titles for many years. But it’s the one-shot, “Hey, did that just happen?” crossovers I’m honoring in this article today.

So here they are, in no fixed heirarchy, my ComicMix Six list of the The Best Celebrity Team-Ups in Comics:

SUPERMAN AND ORSON WELLES: One of the earliest examples I’m aware of, the creator of Citizen Kane and later spokesman for the Paul Masson Wineries Orson Welles appeared in Superman #62. While working on his latest film, Black Magic, Welles accidentally stumbles across the launch site for an unmanned rocket to Mars, and while exploring the ship, it varooms off to the red planet, not as unmanned as previously presumed.

On Mars, he is confronted by the Martian’s tyrannical leader, “Martler.” Martler had taken that name because of his admiration of the Earth Dictator, and patterned his armies after the Nazi example. Apparently he didn’t get the last few news items… Welles naturally refuses his offer to become propaganda minister of Earth, and forces them to show him how to broadcast to Earth. He beams an impassioned plea home with news of the coming invasion, but you guessed it, thanks to his little prank a few years earlier, people don’t believe him this time. Well, nobody but Superman.

Superman arrives in the traditional nick of time and helps stop the “Solazi” invasion fleet, while Welles keeps the soldiers on the ground spooked with a few cheesy magic tricks, a skill that would serve him well later in life on Merv Griffin. He eventually knocks out Martler, and using him like a puppet, fakes a broadcast (irony!) to the people of Mars telling them to stand down. Martler is banished to an unpopulated asteroid, where we must assume he remains to this day. 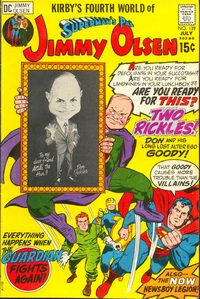 JIMMY OLSEN AND DON RICKLES: It’s not nearly as crazy as it sounds… it was far crazier. When Jack Kirby moved to DC and started the saga that became the Fourth World, he started it in of all things, Superman’s Pal, Jimmy Olsen. In a handful of issues, he introduced Darkseid, brought back the Guardian and the Newsboy Legion, created a whole pantheon of characters DC is still basing major events on… and still had time to write in a plot for legendary insult comic Don Rickles.

The two-issue story (from #139 and #141 – #140 was an all-reprint giant issue) featured not only Rickles, but the curiously familiar-looking “Goody” Rickles, who worked for Morgan Edge (back when he was Darkseid’s front man) at Galaxy Communications. Rickles is going to sign a big contract with Galaxy, only to be interrupted by (and in order) Jimmy Olsen and Goody, who have been doped with a high explosive, The Guardian crashing through a window to give them the antidote, and Clark Kent appearing from a Boom Tube, fresh from from being shot into space and meeting Lightray for the first time. Rickles escapes with what’s left of his sanity. The lucky soul. 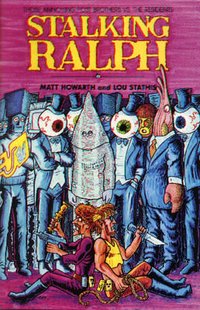 THOSE ANNOYING POST BROTHERS AND THE RESIDENTS: Matt Howarth’s Post Brothers focused ona  pair of psychotic assassins with the ability to shift between realities. Russ Post was more the enabler and dealmaker of the team – Ron Post was a wackjob that Lobo would be afraid of. Based in Bugtown a crazy cyberpunk city of no fixed abode that could give Cynosure a run for its money in the sport of Just Plain Crazy, they formed the core of an amazing sci-fi universe that spread across several titles over their publishing life.

At around the same time he started Post Bros, Matt had done a series of minicomics for Ralph Records starring the characters from The Residents’ current Magnum Opus, The Mole Trilogy. So when Bugtown started to take shape, The Residents followed. But not just in a cameo; they were wholly integrated characters in the books. The Residents were quasi-mystical beings who helped keep Bugtown running properly. They used empty hats as portals to enter rooms. They made a series that was already edgy and experimental and truly out of this world.

More musical artists appeared in the books, including Canadian violin maestro Nash the Slash and Tangerine Dream’s Conrad Schnitzler, and Moby. But it was The Residents that really brought a sense of wonder to the world of Bugtown. 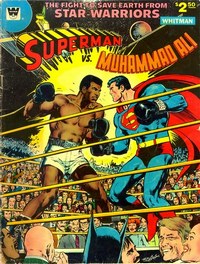 SUPERMAN AND MUHAMMAD ALI: Aliens come to Earth, seeking combat with its greatest champion. Superman seems the obvious choice, but Heavyweight Champion of the World Muhammad Ali respectfully disagrees. The aliens decide Ali and Superman should have a boxing match to decide who should fight their alien champion. Under the light of an artificial red sun in the Fortress of Solitude, Ali trains Superman in The Sweet Science, and when they meet in front of an audience of billions across the galaxy (in what may be the first pay-per-view event ever), Ali knocks out Superman, and goes on to meet a giant blue behemoth in the main event.

Who wins? The reader, of course. A spectacular piece of craziness, written by our own Dennis O’Neil and penciled by the incomparable Neal Adams, including a real masterpiece of a wraparound cover featuring 171 caricatures of television and film stars, Warner Bros. executives and DC staff. It should have been 172, but while ComicMix Editor-in-Chief Mike Gold is listed in the key on the inside cover, he seems to be missing from the art proper. Like those two guys from New Hampshire on the $2 bill, he seems to have been squeezed off the side of the book. 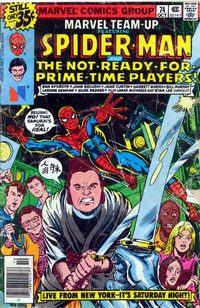 SPIDER-MAN AND THE NOT READY FOR PRIME-TIME PLAYERS: No, Spidey doesn’t guest host… Stan Lee does. (See? I told you he popped up everywhere in the books!) In Marvel Team-Up #74, Chris Claremont pulled a classic comedy plot from a certain Beatles film and brings the world of late-night sketch comedy and spandex-clad superheroes together.

John Belushi gets a mysterious ring in the mail, and once he tries it on, he can’t get it off. Bad news, because it’s actually the property of The Silver Samurai, who spends most of the book trying to get it back. In classic “My Favorite Year” fashion, Spider-Man (and eventually the whole SNL cast) tries to stave off the violence backstage, while keeping it from appearing in front of the cameras. Jane Curtin and Gilda Radner (as Emily Litella) get snatched off the "Weekend Update" set as the Samurai’s goons saw through the floor, thugs mistake Laraine Newman for Ms. Marvel (I’m not sure if that’s a compliment to Newman or a dig at Carol Danvers), Garrett Morris doubles for Thor. It all culminates in a faceoff between The Silver Samurai and Belushi, dressed as his samurai character, and a swordfight that would have made Kurosawa nauseous.

Lee and the audience remain blissfully unaware of the danger they were in… and to be honest, isn’t that a superhero’s job, after all? Extra little gags are peppered all over the book – Rick Jones is the musical guest, Peter Parker and Mary Jane Watson are sitting in front of Statler and Waldorf from The Muppet Show, and as Peter sneaks off to change into his fightin’ togs, the camera centers on him, displaying a title reading “Super-hero in his spare time!” 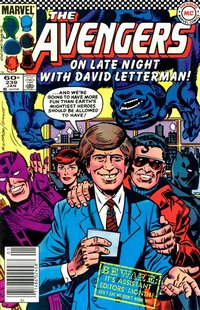 THE AVENGERS AND DAVID LETTERMAN: "Assistant Editors’ Month," the Marvel gimmick that spawned some of the wackiest issues of a comic book in years, all in a four-week period, featured John Byrne drawing Snowbird fighting an abominable snowman in a blizzard (four pages of nothing but white panels, sound effects and word balloons), Fred Hembeck as main artist in Spider-Man and in issue #239 of The Avengers, Marvel’s superteam going on Late Night With David Letterman.

More specifically, struggling actor Wonder Man wanted to get on Letterman, and promised to bring along The Avengers for an appearance. The first-string team was in California, so Hawkeye scrounged up a few second-string members like The Beast and Black Panther to help out. Hawkeye had been rendered almost completely deaf in his recent mini-series, so to cover for it, he got Letterman’s questions beforehand, and just memorized the answers. And Letterman, of course, asked the questions out of order, resulting in a situation similar to an old Bela Lugosi urban legend (Question: “What’s it like being a big star, Bela?” Answer: “Thursday!”).

And the bad guy of the issue? Everybody’s favorite wanna-be villain, Fabian Stankowicz. Filling the studio with death traps, Stankowicz jumped onto the stage and had Letterman interview him while the Avengers struggled with the impending doom. Letterman saved the day by walloping the Mechano-Marauder with a giant phony doorknob. Good times from the days when you could read a book like that and not complain that comedy has no place in a serious book like this.

As I was writing this, my wife tabbed through it, unable to believe such a hodgepodge of stories could have really been written. “What were they on?” she asked.

Without hesitating, I told them exactly what they were on: “Deadline.”

Larger versions of the covers shown in this feature have been included below. 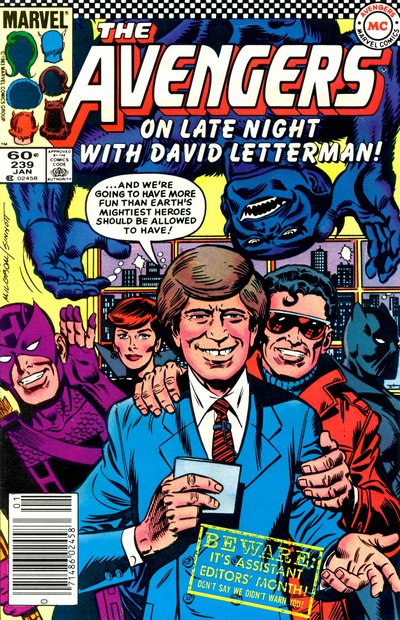 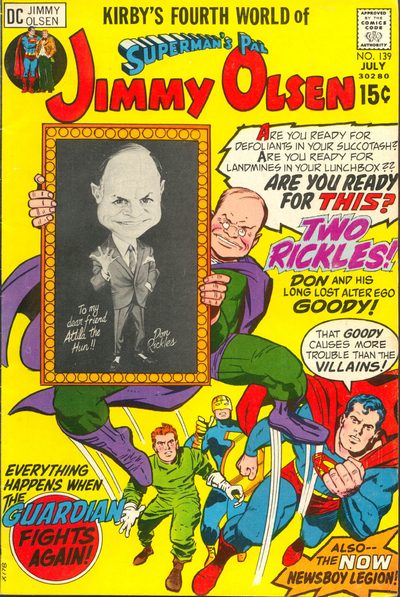 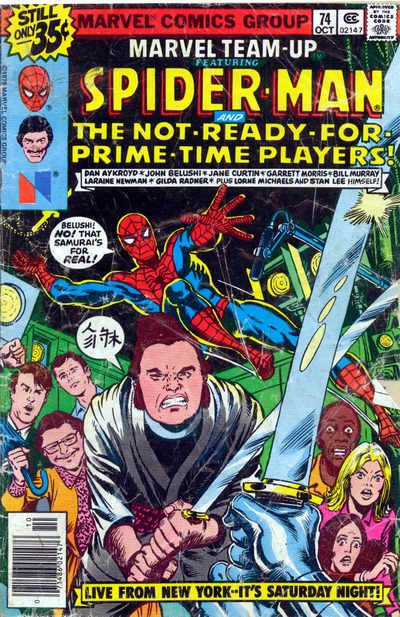 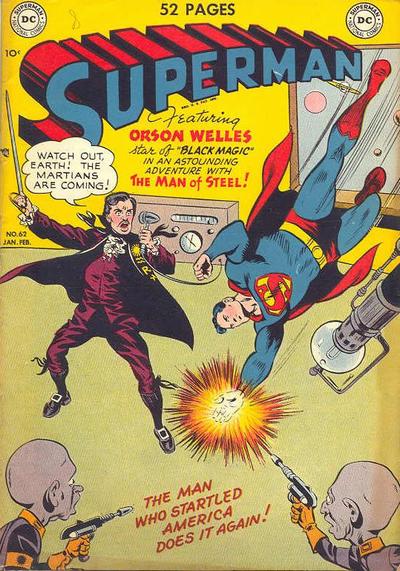 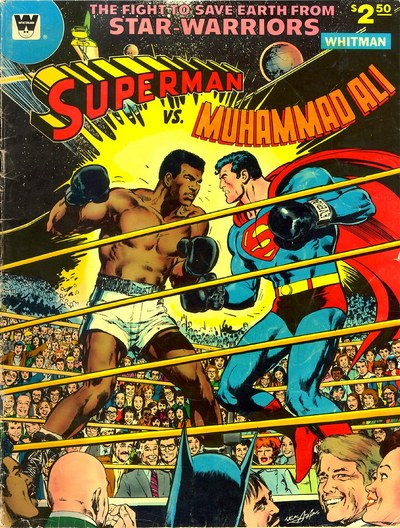