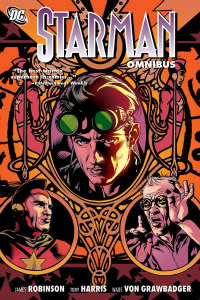 is how, 14 years later, the series remains fresh and invigorating. The story of Jack Knight reluctantly taking his father’s mantle as Starman and protecting Opal City is endlessly inventive, an odd and challenging riff on the superhero.

Now is a perfect time to appreciate the series again, as DC is somewhat surprisingly collecting the entire [[[Starman]]] run into six omnibuses ($49.99 each). The first holds 17 issues, each filled with Robinson’s elaborately labyrinthine narration and plotting.

The first three issues are a perfect example of Robinson’s creative approach. In one night, Jack’s brother, who had assumed the Starman mantle, is killed amid a massive attack launched by an old Starman foe. While it’s a flurried and violent opening, Robinson stretches the story, mining each angle of the fight for richness.

Through that gradual unfolding of Jack taking up the cosmic rod, his character becomes immediately rich and deep. That, no doubt, helped the book to become such a lasting success.

Jack Knight is a typical ’90s hero in some respects. He tends toward being self centered, wears a leather jacket instead of a costume and has no shortage of pop culture references. Yet he also has an unrealized yearning for heroism, a strange yen for kitschy collectibles and a complex relationship with his father.

As interesting as Jack is, the series clicks largely because of the supporting cast. Robinson ropes in a smorgasbord of second fiddles (The Mist, Shade, Solomon Grundy, Rag Doll, Dr. Phosphouros, etc.) but crafts each in such a way as to make these long dull characters suddenly fascinating.

The later issues of the collection are an especially good example of this, as Robinson juggles all these heroes and villains without ever letting one drop. He does this in part through breaking the narrative mold, quick-cutting from one scene to another in jarring yet effective ways.

There are a few points of awkward transitions, or random plot angles that don’t quite fit in, but largely it’s a seemless story. Things do slow down a bit in a couple of issues that delve into historic digression, but those end up fleshing out the history of Opal City, making it one more fully realized character in the drama.

If there is a weakness to the book it lies in the art. Tony Harris’ pencils are a bit rough or underdeveloped in spots, though he shows signs of the eventual maestro he’s become on [[[Ex Machina]]]. A few issues also feature fill-in artists, which lends the collection an uneven feel.

Those are relatively minor quibbles, though, and they do little to deter this book, which is a triumph of superhero comics.