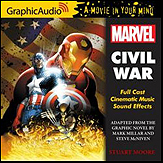 Apparently one of my goals in life is to absorb the Marvel Civil War storyline in every possible medium, since I’ve just finished listening to GraphicAudio’s audiobook version of the prose adaptation by Stuart Moore, having previously read the main collection of graphic novels and then reviewed the prose adaptation. Well, what can I say? I like the story. Since we as consumers of stories invest in heroes in a way we frequently don’t in villains, clashes between heroes can be the most complex and emotionally engaging; and Civil War is one of the most logical storylines comics has ever come up with to explain why superheroes would be fighting with each other instead of the villains.

Also I was curious about GraphicAudio, an audiobook company whose tagline is “A Movie in Your Mind.” They describe their products as “a unique audio entertainment experience that features a full cast of actors, sound effects and cinematic music,” which sounded pretty neat. And I was curious about how a graphic-novel-turned-prose-novel-turned-audiobook would turn out. The answer: pretty awesomely, actually.

I have to note here that while I listen to podcasts sometimes, I haven’t listened to many audiobook-type things prior to this. An occasional short story or poem that happened to be available in audio form for free, perhaps, but mostly when I consume literature it’s by reading. I did enjoy listening to The Green Hornet and other old radio shows that my dad had on tape when I was a kid…but that was a long time ago. A lot has changed since then, including, happily, the quality of recording and sound effects.

Now that I’ve finally tried a GraphicAudio audiobook, though, I’ve discovered that listening to one turns out to be a lot like listening to an old-timey radio show made modern, in the best way possible. Several things contribute to the quality of the experience. The first is the voices, which are very well cast. I don’t think there was a single character whose voice jarred me out of the story – all seemed well-suited to their roles. In one case, almost uncannily well-suited, since GraphicAudio somehow managed to find a Tony Stark voice actor who sounded remarkably like Robert Downey Jr. about 80% of the time. Once I got used to hearing almost-but-not-quite movie Tony, that was actually one of my favorite voice choices, since I love Robert Downey Jr.’s take on the role. The only other voice I had to get used to was the narrator, whose reading at first struck me as a tiny bit too melodramatic. However, as I got used to the style I mostly ceased to notice it. Overall, the voice experience was great.

The second thing that adds to the quality of the experience is the music. It was used sparingly but well to add to the mood and to break up scenes or chapters. Some of the superheroes also had their own little theme pieces that were recognizably about them. Captain America’s in particular was memorable.

The third feature that makes this much more than the usual audiobook experience is the sound effects, which illustrate the action well. Although I know the Civil War storyline pretty well, and I have a good recall of story details generally, there are little details of the story that I had forgotten even since my reading of the prose novel last summer, like the fact that it was raining at (SPOILER) Bill Foster’s funeral. However, after hearing the spot-on sound effects of the rain falling around Reed and the kids, or Tony and Happy, as they stood mourning, I doubt I’ll ever forget that again. Other details also came to life, through sounds like the “thwip” of Spider-man’s web shooters, or the “whoosh” of Iron Man’s boot jets firing up; and the sounds of rough fighting, like when Cap and Iron Man are duking it out, actually made me wince more than once. Even the rustle of sheets of paper, or any of the myriad of other small sounds in the recording, contributed to the overall experience, and truly did make it “A Movie in [My] Mind.”

Interestingly, I found the audio experience affected me slightly differently than either of my other consumptions of the story. I noticed myself feeling some emotions more, and, in particular, feeling even more frustration with *&^%$ futurist Tony Stark’s *&^%$ idiocy. (Sorry guys, but I’m with Cap on the whole individual freedom and privacy thing, and was always pissed that Tony “won,” despite the logic of his plans and what he was trying to do. Maybe part of that is because Tony is just so arrogant and unbending in this storyline. All that futurist stuff, while it may be part of what makes Tony good at his work and being Iron Man, is also super arrogant and always rubs me the wrong way.) I also felt the sadness of certain moments more, for example, or the anticipation before a fight, or tension for favorite characters during or after a fight (even when I knew how it would turn out). Aaaand, of course, inevitably, I laughed out loud at a few things while riding on a Metro train, which always makes me worried that my fellow commuters might think I’m a little crazy. But hey; that’s okay as long as I’m having fun, right?

And this audiobook was fun. Listening to the story this way was a rich and engaging experience. It’s also definitely reeled me in as a new GraphicAudio customer, and I am already planning to find some other good stories to accompany me on my further commutes and to the gym. In conclusion, if you can’t tell by now: I highly recommend this audiobook, and, from what I’ve heard so far, GraphicAudio as well.

So give it a try, and until next time, Servo Lectio!