It happens every few years, just like the Olympics or locusts: People lucky enough to live in democracies hold an election.

That’s why, with primaries on the horizon and campaigns dominating the headlines, we’ve decided to take a look at some of the most notable attempts (successful or otherwise) at obtaining political office in the comics world… in typical ComicMix Six fashion.

6. Myra Fermin, Mayor of Hub City (DC): In the most corrupt city in the DC Universe, Myra ran on a platform promising to clean up the mess. And she won, because there had to be a reason she couldn’t sleep with the Question.

5. Gary "The Smiler" Callahan, President (Vertigo): This mayoral candidate gave Spider Jerusalem a lot to write about in Transmetropolitan. At first, Spider liked him more than his predecessor, "The Beast." And then, Spider learned the truth. Basically, The Smiler was sort of like Rudy Giuliani, but without the combover.

4. Barbara Gordon, U.S. Congresswoman (DC): Her father is police commissioner. She’s a librarian. Naturally, she runs for Congress to represent Gotham City. She gets elected on a platform promising to bring the organizational discipline of the Dewey Decimal System to Washington.

3. Oliver Queen, Mayor of Star City (DC): Star City is a mess, and only a millionaire playboy can save it from itself. Think Michael Bloomberg, but with ideals and physical prowess.

2. Howard the Duck, President of the United States (Marvel): Doesn’t the constitution require that one be a human to be president? Whatever; the "All-Night Party" is still a great idea.

1. Lex Luthor, President of the United States (DC): A briliant but evil billionaire scientist. A criminal mastermind. A sociopath obsessed with besting Superman. And still, better than Dick Cheney. 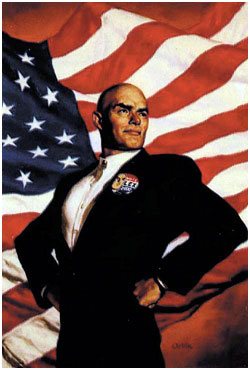 Did we miss anything? Let the ComicMix crew know your favorite political campaigns from the world of comics in the comment section below this article!