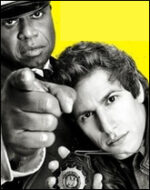 Evidently it’s teevee week here at ComicMix, with Martha, John and Mindy weighing in on their thoughts regarding the new season. Well, you build a bandwagon and sooner or later, I’ll jump on it.

I’m not much of a broadcast television fan. Most of the shows I enjoy are made-for-cable, with their 12 episode (give or take) seasons that create an environment for better writing. Justified, Doctor Who, Sons Of Anarchy, Boardwalk Empire, Louie… that’s my idea of Must See TeeVee. But I start each fall season checking out a few broadcast shows, and this season I found four that were worthy of my limited attention span.

I, too, share the prevailing opinion that The Blacklist is a wonderfully entertaining show. Of course, it’s really the James Spader Show, and if you don’t like him you most certainly won’t like the show. Or, most likely, the upcoming Avengers 2 movie. In fact, even if you do like Spader you might not care for The Blacklist if you like your lead characters to be rooted in ethical behavior. But if you like evil anti-heroes screwing around with the government – and, let’s face it, a whole lot of us do – then this is probably your go-to show of the season.

I also follow the dominating opinion in these precincts that I’m slightly disappointed in Agents of S.H.I.E.L.D. I was looking for a contemporary version of the first season of The Man From U.N.C.L.E., and this comes close. But they gave us too many agents and it’s hard to develop any strong feelings for or against any of them. Dropping one or two would help us get to know the others and make for smoother plotting and action sequences. Nonetheless, I find it entertaining enough to maintain on my TiVo season’s pass list.

If I’m not all that interested in broadcast television, I’m even less interested in sit-coms. They are as predictable as a courtroom transcript, and they often star a stand-up comic who is far, far more entertaining doing stand-up. I checked out two: Brooklyn Nine-Nine and The Crazy Ones. I checked out Brooklyn Nine-Nine because I’m a huge Terry Crews fan; he’s one of those guys who could he reading the Yellow Pages and I’d probably give it a try.

I really had no expectations for Andy Samberg: it’s been so long since Saturday Night Live had adequate writing that I can’t get a feel for the quality of the performers. Given the extreme broadness of his character on this show, he’s fine and almost endearing. It was clear to me that Andre Braugher was going to be the tight-ass police captain who could not possibly co-exist with a person as free-spirited as Samberg, and that’s pretty much the case. And, similarly, his nurturing of Samberg is no surprise. But Braugher transcends his own stereotype, aided by an interesting character bit: he’s gay, one of the first gay men to achieve such an exalted position in the NYPD. And he worked hard for it.

The bottom line on Brooklyn Nine-Nine: each episode, I found myself laughing out loud several times. That’s the highest praise one can offer a sit-com, particularly a jaundiced cynic such as me.

I landed on The Crazy Ones for two reasons: I enjoy Robin Williams’ insanity-with-heart act (there’s been no one better at it since Buster Keaton), and I really like David E. Kelley’s work… which gets us back to James Spader. I’ve enjoyed this series thus far and it has a fine supporting cast, although sooner or later I’m probably going to want to see it evolve a bit and its characters grow – including Williams’. But after three or four episodes, it still entertains me and that, for better and worse, is the purpose of broadcast television.

I can’t imagine watching three broadcast sit-coms once Community returns in January, but who knows. This season might be the exception.