REVIEW: Doctor Who: “Terror of the Zygons”

The Zygons only appeared in one episode of the classic series, but their look was so unique they continued to appear in the novels, audio plays and more.  After an off-camera cameo in this season’s The Power of Three, they’ll be featured on the anniversary episode, The Day of the Doctor. 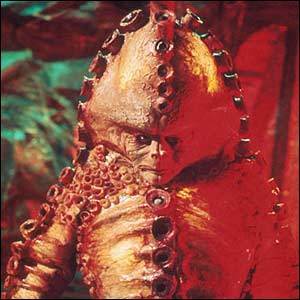 Their original adventure, Terror of the Zygons, get the restoration treatment in this new DVD release.  The episodes are in great shape, and includes a :director’s cut” of episode one, with a deleted scene, a rarity in the original series where nearly no waste was allowed.  The adventures feature commentary by the series producer Phillip Hinchcliffe and the writer, Robert Banks Stewart.  The subtitle option of the trivia track is an exhaustive repository of production factoids that almost guarantees you facts you didn’t know previously.

The extras on disk two are a delight – in addition to a documentary about the making of the episode, where Sussex took the role of Scotland.  There’s a truly hilarious interview with Tom Baker, who rules the screen with a series of mad stories.  Elisabeth Sladen shares lots of stories about the early Baker adventures in her short, and there’s part three of a continuing doco on the UNIT team, featuring interviews with Lohn Levene and Nicholas Courttney.  Also included is an episode of BBC educational program Merry Go Round, starring Elisabeth Sladen, about the oil derricks of the type that played so important a part of this adventure.  A news piece from South Today features an interview with Baker on the location in Sussex, about the episode and his success in the series.

The early series’ adventures don’t often get seen by new fans who are largely unaware of the show before 2005.  These classic series DVD releases give the new fans that chance to see more of the history of the show, and see that many of those stories still hold up today.