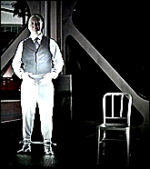 My favorite new show of the TV season is not Marvel’s Agents of S.H.I.E.L.D. as I thought it would be (although I like that show well enough). It’s The Blacklist… which is on opposite Castle. I loves me some Castle so I have to record one and watch the other live; so far, Castle is winning out but sometimes it’s a near thing.

The Blacklist is about Raymond “Red” Reddington, a master criminal who the FBI has been unsuccessfully hunting for some time. One day he surrenders and offers to help them take down other monsters on his blacklist but he’ll only work with FBI profiler Elizabeth Keen, whom he insists on calling “Lizzie”. She doesn’t know him and neither she nor anyone else at the FBI knows why Reddington has offered his help but they must admit he’s very effective – especially with criminals and terrorists they didn’t even know were out there.

The series is derivative and there’s a Silence of the Lambs Hannibal Lecter/Clarice Starling vibe to it, but the main reason to watch it is James Spader as Reddington. He’s charming, charismatic, dangerous, and scary. He’s playing all sorts of games and what he’s really after is impossible to guess. Spader is obviously having a wonderful time with the part and is amazing in the role. Reddington is a killer but not a serial one; I’ve come to the conclusion that Reddington is less Hannibal Lecter than Professor Moriarity.

What Spader’s Reddington demonstrates is a dark, glittering intelligence and that makes him a fascinating character and, in that, he is like Lecter. Over the ages, this type of character, in different variations, has become a recurring character type. Hearth Ledger’s Joker falls into that category as well. So does Shakespeare’s Richard III. Something in our own atavistic reptilian brain stem gets drawn to them. Well, at least my atavistic reptilian brain stem does.

The trick is getting us to root for them although they’re monsters. Reddington admits to it. Why do we do that? There’s an appeal to our own dark sides. The monsters embody our dark urges on which we would never follow through. They’re our dark fantasies – unbound by social conventions. They appall us as they enthrall us.

We root for the anti-hero as well as the hero – if the anti-hero is done right. That’s the challenge for the creator. I’m guilty of it myself; in Wasteland, I once did a story from the serial killer’s point of view. The goal was to see if I could get the reader to identify with him. That would be where the horror part of the story really came in – when (if) the reader founds themselves identifying with him. Look to the recently completed Dexter or Breaking Bad. The popular success of those series – along with The Sopranos or The Shield – attests to the fact that we are willing to go there – to root for the bad guys. They need to know who/what they are, accept it, and don’t whine. That’s what we want and that’s what we love. If we’re honest, we like Loki more than Thor. Characters like that give us a delicious thrill.

Angels are beautiful, but the devil is sexy.