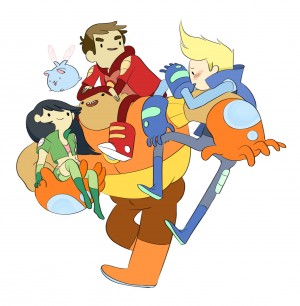 On October 17, one of the hottest animated series returns for a second season as Frederator Studios unleashes all new episodes of the breakout hit Bravest Warriors exclusively on its Cartoon Hangover YouTube channel.

From Pendleton Ward, the creator of the Emmy-nominated Cartoon Network smash hit Adventure Time, Bravest Warriors chronicles the out-of-this-world futuristic adventures of four teenaged costumed heroes as they warp through the universe to save adorable aliens.  Joined by fan favorite characters Catbug and Impossibear, the Bravest Warriors split their time between intergalactic adventures and hanging out in their invisible giant robot hideout.  The new season will feature 12, 5-minute episodes with new installments debuting every other Thursday at 4pm ET.

Upon its premiere last Fall, Bravest Warriors became an instant hit.  The 11 episode first season has garnered more than 32 million views to date, and won the Shorty Award for Best Web Show of 2013. Its appeal has also attracted the attention of the licensing community, with more than 15 manufacturers signing on to develop an array of merchandise featuring Catbug, Impossibear, and the warriors that is now rolling out to Hot Topic, Wal-Mart and other retailers.

The Bravest Warriors second season premiere episode , “Aeon Worm,” directly follows the season 1 finale cliffhanger “Catbug,” with the secret of the mysterious, unlockable door sent from the See-Through Zone where their parents have been trapped for two years.  The new season will feature episodes written by Jhonen Vasquez, the creator of Nickelodeon’s cult-hit Invader Zim, and rising star Noelle Stevenson, best known for her Internet Comic Nimona.   The roll-out of the new season is being supported by a multi-platform social media campaign across YouTube, Facebook, Tumblr, Google + and Instagram.

The show is the flagship series for Frederator Studios burgeoning Cartoon Hangover YouTube Channel and the new episodes are part of an aggressive programming expansion planned over the next year. Conceived and developed by Frederator Studios’ head Fred Seibert – the animation luminary whose executive producing credits include such animated blockbusters as Adventure Time, The Fairly OddParents, The Powerpuff Girls and  Dexter’s Laboratory – Cartoon Hangover ranks as one of the fastest growing channels from YouTube’s 2012 funded channel initiative.  Since its launch in November 2012, the channel has generated  more than 13 million unique viewers (source: YouTube Analytics), over  55 million views of its programming, more than 156 million minutes watched of its shows, and over 780 thousand subscribers.  Cartoon Hangover is part of Channel Frederator, a new multi-channel network devoted to animation and entertainment.

“The internet is ushering in the next golden age of animation.  We created Cartoon Hangover to hurry it up and give tomorrow’s hitmakers a platform to show their creations to big audiences who deserved and are craving quality animation, wonderful writing and great characters.  Bravest Warriors reflects the type of highly-innovative and imaginative entertainment Cartoon Hangover will deliver as we look to lead a whole new animation revolution,” said Mr. Seibert.

Bravest Warriors is directed, written and executive produced by Breehn Burns, with Frederator Studios serving as series producers.  The show was developed by Breehn Burns, Will McRobb and Chris Viscardi (Pete & Pete, Sanjay and Craig).

Also this month, Cartoon Hangover will continue to unveil new animated shorts that could serve as the inspiration for new series on the channel.  This includes Dead End, created by Hamish Steele and animated by Mel Roach, who has also created the popular Cartoon Hangover short, Rocket Dog.  Dead End tells the tale of the dynamic trio of Barney, Norma, and Pugsley who discover that a ghost is haunting their Wifi, and clogging up their Internet connection with ectoplasmic goo. The Dead End pilot is slated to release just in time for Halloween on Thursday, October 24.

The new season will feature 12, 5-minute episodes with new installments debuting every other Thursday at 4pm ET.

You can also check out the new trailer: