ALL PULP REVIEWS- By Ron Fortier 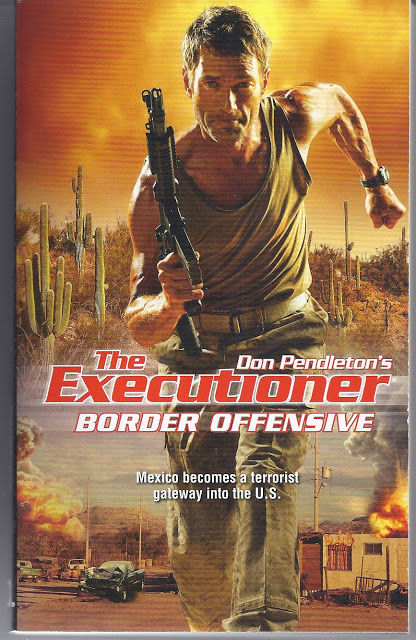 We were discharged from the U.S. Army and returned civilian life upon our return home from Vietnam in the summer of 1968.  Sometime shortly after that major life change, we picked up a paperback book from a new publisher called Gold Eagle; the book was “Mack Bolan – The Excutioner” and the author was Don Pendleton.  It told the story of a Vietnam veteran who comes home to Massachusetts to bury his family, all dead because of the local Mafia which the police cannot bring to justice because of lack of evidence.
Incensed that while he was fighting for his country in a foreign land, his own loved ones were being victimized back home, Bolan realizes he’s been fighting the wrong war.  He goes AWOL, arms himself and retaliates against the local mobsters responsible for killing his family. By the book’s end he is a fugitive on the run but oddly content with his new role; that of an avenging angel who will take on the mob with no regards to his own safety.  He will become their Executioner and do what the law cannot; mete out justice.
It was heady stuff but even to a twenty-one year old reader, it was also very familiar.  Having learned about pulp fiction and their history over the years, it was all too easy to recognize this new paperback series was in fact a brand new attempt at mass market pulp fiction and in his own way, Mack Bolan, had become the Shadow of our times.  Confirmation of that theory quickly followed when Gold Eagle not only began issuing new Bolan adventures monthly but also debut another series about a secret agent trained in martial arts called The Destroyer by Warren Murphy and Richard Sapir.  Just like that these two on-going action packed series launched an entire two version of American paperback pulps that would flourish throughout the 1970s.  Within months other paperback companies were putting forth their own wild and wooly series from the Black Samurai, to the Lone Wolf, the Chameleon and the Baroness to name on a very few.  By the end of that decade there were dozens of these on the bookstore racks.
Of course Pendleton, being only human after all, couldn’t possibly keep churning out book after book after book. Thus the editors of Gold Eagle adopted another practice of the old pulps; they hired ghost writers to produce books all under Pendleton’s name. As this became the norm, even after his death, the true author was given their due credit on the indicia page with the phrase, “Special thanks and acknowledgement to John Smith for his contributions to this work.”  Over the past forty years dozens of authors have found their name in this sentence.  Which brings us to this latest Executioner adventure and its author, new pulp writer Joshua Reynolds.
Being familiar with Reynolds’ work on reviving classic pulp characters ala Jim Anthony Super Detective and Dan Fowler G-Man, we decided it was time to revisit Mack Bolan after almost twenty years and see if anything had changed in the set formula of the books. Happily the tried and true elements were still there; tons of violent action with a stalwart hero who preserves despite all manner of physical duress.  Reynolds easily slips on the Executioner styling opening the book with Bolan in Mexico having just destroyed a drug cartel’s money making poppy fields.  On his way back to the states, he runs afoul of a group of Texas coyotes; men who smuggle illegal Mexican immigrants across the border for cash.  Knowing these characters to be merciless thugs, Bolan opts to investigate the situation and inadvertently interferes with an undercover border agent’s plan to bring down the two sadistic brothers running the operation.
Then Bolan and his new ally discover the coyotes are working for an al Qaeda agent named Turiq Ibn Tumart who plans on infiltrating the ranks of the poor Mexican workers with one hundred al Qaeda terrorists and in this manner smuggle them into the U.S. to wreak whatever murder and destruction they can perpetrate on unsuspecting American cities.  Now it’s up to Bolan and the young agent to find a way to stop this deadly convoy and destroy both the coyotes and their fanatical Jadhists allies.
“The Executioner – Border Offensive,” is an excellent addition to this long running series and kudos to Reynolds for this gritty, fast paced new chapter in the on-going war against evil by the one and only Mack Bolan.  Pick it up, pulp fans, you won’t be disappointed.
Share