GUEST REVIEW-SALMON GETS IN THE RING WITH GOLDEN GATE GLOVES! 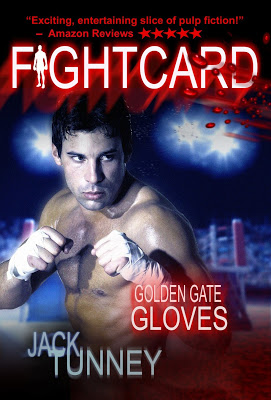 This installment in the great Fight Card series starts off in the reader’s comfort zone. As the goal of recreating the classic pulp fight fiction of yesteryear is the goal of Fight Card, having Golden Gate Gloves begin with part-time fighter, full-time dock worker, Conall O’Quinn working hard at the San Francisco docks is typical of the genre and any fan of this type of fiction could probably finish this story from there: fighting to prove who is the toughest on the dock, trouble with organized crime, a penultimate fight with everything on the line. These are the foundation posts of this type of fiction — any fan knows that going in — and it falls to the writer to squeeze every ounce of enjoyment out of the formula.
Although Robert Evans, writing as Jack Tunney, begins his tale in this tried and true tradition, with O’Quinn having to fight the dock boss’s son to prove he’s the toughest only to get fired when he meets the challenge, the story then takes a refreshing right hook to the country and the hunt for buried treasure. Yes, you read that right. O’Quinn, in fleeing crooked crime bosses and labor leaders, stumbles upon a treasure map pinpointing buried gold in the abandoned California gold mines.

Only the mines are not abandoned and we are soon treated to a fish (or should I say, fist?) out of water tale with O’Quinn and his partner searching for the lost gold while working for the current owners of the mine. It doesn’t take long for O’Quinn to fall in love with the mine boss’s daughter and it doesn’t take long for the trouble he left in San Francisco to catch up to him while he is left to battle for the hand of the woman he loves.

If it sounds like there’s a lot going on in this stiff jab of a tale, that’s because there is and Evans keeps the pace moving quickly as he introduces us to two distinct settings and casts of characters in 76 pages. The fight scenes are great and you feel every punch as O’Quinn is battling for his life against disreputable opponents. For $2.99 you get your money’s worth in this novella as there’s enough going on here to fill a good size novel. What Evans pulls off so well is to give his tale that full feeling without the needless padding so prevalent in today’s fiction.
Golden Gate Gloves delivers. Check it out.
Share