Marie Severin Gets What She Deserves – At Last! 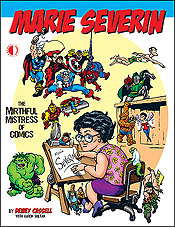 It was 1978, and the electric current going through DC Comics’ offices could have lit Times Square. Vice-President and Production Director Jack Adler was strutting around like a proud papa. For the first time in what seemed like a millennium, Marie Severin was paying a visit.

If you were from outside the donut shop, you’d think the President was in the house. Work came to a complete stop. Everybody swarmed to the production department to meet, or to see once again, the famed artist and gifted humorist. That she toiled for the company’s competition and yet received this reception is an acknowledgement of her talent and abilities.

The masterful colorist of the legendary EC Comics line, Marie worked at Marvel Comics for decades as an art director, a penciler and an inker. Her credits read like a Who’s Who at the House of Ideas: Doctor Strange, the Incredible Hulk, Sub-Mariner, and Robert E. Howard’s Kull the Conqueror. That’s quite a range, but she was best known for her satirical work in Marvel’s underrated Not Brand Echh, a book worthy of Masterwork edition if there ever was one.

She was even better known within the industry for her sense of humor. I have never met a person who wasn’t a fan of her work – and a fan of hers, personally.

TwoMorrows just published Marie Severin: The Mirthful Mistress of Comics ($24.95; digital from TwoMorrows for $7.95), a long overdue review of her work written by Dewey Cassell with Aaron Sultan. It was worth the wait.

174 pages of analysis, history, interviews, photographs and about a zillion examples of her work, including a healthy amount of unpublished work – much of it in-house stuff reflecting her breathtaking sense of humor. Tributes abound: Marvel and EC honchos Stan Lee and Al Feldstein, Jack Davis, John Romita, Mark Evanier, Tony Isabella, Roy Thomas and maybe a dozen more folks, all fronted by a foreword from ComicMix columnist and comics luminary Denny O’Neil.

Marie has been one of the most important and most creative people in the history of this medium. Marie Severin: The Mirthful Mistress of Comics tells you why. If you’re already a fan of hers, you either have this book or it’s on your short list. If you’re not all that familiar with her legacy, you need this book.