Review: ‘Networked: Carabella on the Run’ 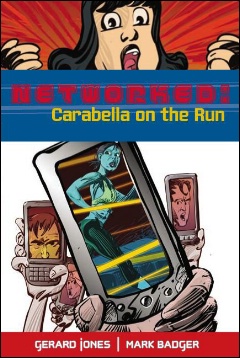 Networked: Carabella on the Run

The issue of privacy in the digital age is an ongoing dialogue as some people feel too much personal information is available to anyone skilled at cyber research while others prefer sharing every aspect of their lives. For several generations, the specter of George Orwell’s Big Brother has loomed large over the evolving technology field, occasionally raising the concern that the government will use this data in ways to which we would object – if we knew.

Privacy Activism is a non-profit company designed to make people aware and give them knowledge and tools to determine how much they want to share or to protect. To educate the younger masses, they created Carabella, a hip, blue-skinned college-aged woman and have used her in several outreach programs. For her third appearance, she has been turned over to master graphic novelists, Gerard Jones and Mark Badger, for Networked: [[[Carabella on the Run]]].

Given the graphic novel’s agenda, one can forgive some of the heavy-handedness of the storytelling and the over used cliché of a government conspiracy to use the personal data to control the population. Carabella is an odd girl as her college friends get to know her. There are too many things that seem unfamiliar to her and she has trouble navigating the basic social conventions.

When she starts receiving texts and e-mails from students interested in getting to know her, she freaks out, wondering how they discovered her contact info. In time, she finally meets engineering student Nick Shumer and falls for him. As she begins to let down her guard, he begins acting oddly, which makes sense since he recovered a bit of her personal technology that he reverse engineers for his own purposes.

The tech, essentially the protomatter of the story, enables him to perfect the most technologically sophisticated walking shoes and he loses sight of things as he is seduced with fame and fortune. In time, though, Carabella realizes what he has done and finally reveals her secrets that propel the story in an entirely different direction, addressing the core privacy issues.

The first half is more engaging as the characters act like real people and the world of college feels right for the theme. The science fiction second half is lots of action and deering-do but also feels more predictable and less compelling. Jones does a nice job with Carabella’s personality while Nick’s character seems to be changing scene by scene.

Badger’s art flows nicely from scene to scene and the work has a fresh feel, although some of his color choices struck me as odd given the role color plays in the second half. Some of the shading to the faces isn’t as successful as one would hope.

There are some strong messages here and plenty of food for thought. Presenting this information embedded within an entertaining graphic novel was a great approach. The agency gets credit for providing chapters online along with a guide for teachers to use, to drill home the messages in the classroom.