Michael Davis: Steranko – Who Is He, And What Is He To You? 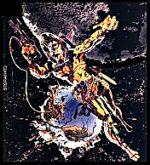 I could understand not being aware of Creative Source. They were a bit off the beaten path. However any music fan not aware of Bill Withers should drop less Ecstasy and lighten up on the trance. People, Boom, Boom, Boom with an occasional auto corrected voice may be music, but a song it is not.

Whatever age you are, if you are a fan of comics you should have heard of Jim Steranko, or simply Steranko as he is better known.

A comic fan, a true fan of the medium, not aware of Steranko is akin to a history buff thinking Lincoln is only a carmaker.

I’m not about to, nor am I qualified to give a detailed overview of his work. Please, yes I’m saying please, do yourself a big favor and look him up.

As I said, I can’t even begin to cover his contributions to our industry but I will share with you what I hope is a small indication of his importance to an industry he changed forever.

In the mid to late 90s I ran Motown Animation & Filmworks, (MA) Motown is the most famous record company in the world and if you doubt that name three record companies and do so without Goggle.

MA was a film and television division of Motown that at the time Motown was owned by Polygram and both were Phillips Companies.

Phillips is a enormous corporation and anything what comes under their umbrella is protected with an army of lawyers that will crush any affront to their intellectual properties (IP), patents, products and the very saying of their name is like a lone Klan member yelling “jungle bunny” at the Black Murderer convention.

On the flip side, if you make any move while within a corporate structure that has even the smell of being problematic you could be bitch slapped.

Bitch slapped like I was when I appeared on a CNN financial news show and answered “Fine” when asked how I thought what I was doing would affect the stock price.

The show was live and after I unclipped my lapel mic – if that long – my cell rung. The booming voice of Clarence Avant, Chairman Of The Board of Motown Records told me to, “Never, ever, comment of the stock price, anywhere, anytime for any reason!”

He was not happy.

And that was just over one word.

That was a serious blunder on my part. I simply didn’t know but ignorance when you head up a key division of a major company is no excuse.

I learned fast that without first running some decisions past Business Affairs I’d run the very real risk of a very bad day.

IP was at he very heart of my core business at Motown and because of such I created a comic book division called Motown Machineworks. One of the titles was a book and character called Stealth.

As soon as the press broke on that book I got a call from a fairly well known artist. I won’t mention his name because what I’m about to say may cause him to pop some shit in my face when next we meet and I don’t need that kind of noise in my life. Hell, I’m already on probation because of the last two people who popped some shit in my face.

This creator said he had a friend who was producing a book called Stealth. I said that was a problem. He agreed. But he said the problem was mine.

I explained to him that MA owned the trademark to that character name and suggested whatever he was smoking he stop. He boldly told me that he would create a P.R. nightmare for me if we did not “Cut the kid a check.”

“So let me get this straight. I pay someone to stop you from causing Motown a public relations problem over a trademark we own.”

Yep, that’s what he meant.

“Fuck you.” I cheerfully said with a pretty good chuckle. “Tell that kid to lawyer up and I’ll make sure he knows you were the one to clue me in.”

Never heard a word from him on that matter.

Even if I wanted to cave like a little bitch when I had no reason in the world to do so, the amount of time and effort dealing with this would be a needless waste of resources and resources mean money and losing money in corporate America is bad but wasting money on a non issue?

I may have been shot.

What, pry tell, does this have to do with Steranko and his importance to the comics industry? I’ll tell you.

A couple of days later I get a call from Jim Steranko.

What follows is the word for word exchange between Jim and I. This I know because I have journals going back to high school. The time of the entry is 2:20 pm. That means I did not wait to get home to write about it.

“I’ll get to the point, I created a character called Stealth some time ago and I read recently that you are launching a book about a character with the same name. I’m sure my character predates yours and I call on you as a gentleman to step back from that name.”

How important is Steranko to comics?

His impact in the field commands and deserves that kind of respect.