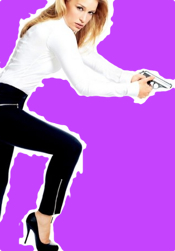 Fictional spies seem to come in two varieties, with numerous subsets: There are the glamorous and super-competent who bop around the globe, always traveling first class, driving lavishly sports cars, staying at palatial hotels, indulging in expensive cuisine and exotic liquor and comely members of the opposite sex and killing bad guys and saving civilization from slightly caricatured nut cases. (Bond – James Bond.)

This kind of secret agent is currently represented on television by Covert Affairs, a show in which the superspy is a woman incarnated by Piper Perabo. Her character isn’t quite as over-the-top as Bond, and thus far her opponents haven’t been any more caricatured than most televised antagonists, but she is one tough jet-setter who doesn’t stay in hostels when abroad and seems to have no qualms about her profession. She is part of a CIA unit that functions as a surrogate family, has a brotherly colleague with whom she has a platonic (so far) relationship, and even a biological sister. Oh, and she’s gorgeous. Did I mention that – the gorgeousness?

The other kind of fictional spy is a lot less fun. You find him/her in print in the novels of John LeCarre and Graham Greene and on the screen in movies made from those novels, and, I guess, some others. On the screen in your living room, this brand of spy is represented by another woman who is a far distance from Ms Perabo’s Annie Walker. Claire Danes’s Carrie Mathison, of Homeland fame, is deeply conflicted and in need of psychiatric help, which she got in the last episode of the previous season in the form of shock therapy. Ouch!

She has a love-hate relationship with her primary antagonist and doesn’t always mesh with her fellow CIAers. She usually looks unhappy and she’s been known to raise her voice. Her world is dark and the mortal climate is ambiguous: watching Homeland this week, I saw a beautifully written and played scene in which Carrie and a terrorist debated the righteousness of their respective causes and neither was in error. Grey is apparently the universe’s hue of choice and Homeland reflects that.

So what kind of spy story is better? Hey, no need for such a comparison. There is absolutely nothing wrong with pure entertainment and I would sashay along Annie Walker’s path any time. But – maybe drama should occasionally try for something more than entertainment. Maybe it should reflect the perplexities of the real world and maybe it should prompt us to question inherited wisdom and assumptions and so, if we were indulging in pointless comparisons (and we’re not! We’re not!) Carrie would be the more valuable she-spy.

But I’d still rather sashay with Annie.

RECOMMENDED LISTENING: The Science of Natural Healing, presented by Dr. Mimi Guarneri and available from The Teaching Company. The information Dr. Guarneri gives us could conceivably save lives. Stuff everyone should know.

FRIDAY: Martha Thomases – Where Are The New Nerds?