A Helpful Note re: “Redshirts” Review 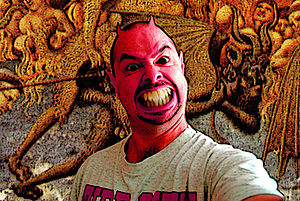 There seems to be an idea floating about in the ether that my review of John Scalzi’s new novel, Redshirts (posted late yesterday) is negative, and that I don’t like Scalzi’s books.

Both are untrue. Redshirts didn’t strike me as laugh-out-loud hilarious, as it has been billed [1], but it’s a pleasant, quick entertainment — and Scalzi is reliably entertaining, which is why I keep grabbing his novels as soon as I see them. None of those books has been perfect, though, so when I’ve written about them the most interesting (and, I think, useful) tactics have been to poke at the bits that don’t work as well. [2] Writing otherwise — focusing only on the things a book does well — is certainly enjoyable for the author, but I don’t think it’s as effective for everyone else in the world.

My reviewing mode tends to be more negative than positive, I know, but you really can tell when I actively dislike a book. Take, for example, my reviews of two of last year’s Hugo darlings: Mira Grant’s Feed and Connie Willis’s Blackout/All Clear.

Redshirts, on the other hand, I basically liked — the “codas” at the end, in particular, are really good stuff. If I’ve driven any readers away from it by not stating that it’s the funniest thing since the invention of the seltzer bottle, then I do apologize. You may well find it substantially funnier than I did; at least four SFnal luminaries have already done so.

[1] Which was sad for me; I wanted to read a book as funny as I was told Redshirts was.

[2] Though I have definitely reached the point where noting that Scalzi is not interested in carefully building up his worlds from close readings of Nature and his flying slip-stick is entirely beside the point; he’s not that kind of writer. Come to think of it, I usually make fun of that kind of writer as well.