Mike Gold: Bourne, On The Fourth Of July 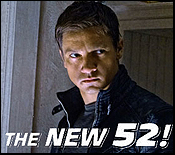 I’m not the world’s biggest Jason Bourne fan. Not by a long shot. I’ve seen and enjoyed the movies but I haven’t read any of the books. But two days ago, as I was sitting in the theater awaiting The Amazing Spider-Man (for the ComicMix Mixed Review), I saw a trailer for the latest chapter, The Bourne Legacy. It’s a continuation of the series… but without Jason. As I was watching the trailer, I was thinking in the terms of my trade.

We can argue if this is a genuine reboot or not, but let’s ride with the concept for a bit. My next thought was “why do the teevee and movie people do successful reboots of major properties, while in comics we butcher it every chance we get?” Which, by the way, is way too frequently.

Recent media reboots have included James Bond, Doctor Who, and Sherlock Holmes – the latter, twice. Other reboots have included Superman, Batman and the aforementioned Spider-Man. Only the former lacked enduring success. The Batboot was stellar, and we’ll have to wait and see about Spidey. So, of the five major characters, only one was a bust.

Allow me some jealous feelings here. To paraphrase Paul Simon (the singer, not the dead politician), after reboot upon reboot, the comics biz is more or less the same. Yes, there’s usually a solid sales bump and maybe it lasts long enough to make a difference, but that’s almost always short-lived. Is the Spider-Man marriage thing resolved? Is Jean Gray forever dead? What about Uncle Ben? Are you sure? Go ask Captain America and Bucky.

Over at DC, they’ve pressed the reboot button more often in the past 37 years than a lab monkey on an crystal meth test. How long should a reboot last before it’s deemed successful? I don’t know; we’ve never had one that lasted more than a couple years. Is the New 52 successful? Well, yes, in the sense that Dan DiDio still has his job. But they’ve only got sales figures in for the first year, and over a third of the titles have either been cancelled or have endured new creative teams. That doesn’t make it a failure, but if simply cancelling some titles and changing the crew on others is all it takes to make a character work for a contemporary audience, then we don’t need reboots.

In fact, this is the error message we get over each reboot. There’s no system upgrade here. We could have provided stability and growth by simply cancelling some titles and incubating those characters within their universes, and by changing creative teams on others – creators who will not restart history, but simply put it on an exciting path out of the woods. This may be the real “success” of the New 52. We’ll see in maybe five years or so.

The fact is, the media people haven’t pissed all over the trust of their audience. Despite public perception, most all of the pre-reboot movies and television shows featuring James Bond, Doctor Who, Superman, and Batman made money (I really can’t say about Sherlock Holmes; he seems to have made PBS a lot of money in the form of enhanced underwriting and public support). Maybe not enough to support the highest-ups’ eight figure salaries, maybe not as great a return on investment to make the stockholders happy, but in an industry where they put tens of millions of dollars on the line with each project – more than enough in each case to support a front-of-the-catalog comic book publisher – a five million dollar profit might not be a desired return on investment, but it’s still five million dollars.

Comics executives and, more important, their corporate masters need to give the four-color medium the same degree of patience and, quite frankly, they need to give their consumers the same amount of respect.

We need a comic book industry with an attention span.