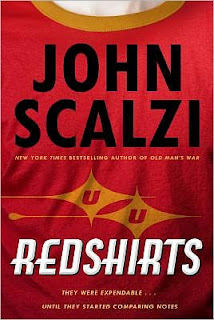 It is simply impossible to declare a novel “not funny.” Humor is so personal that all any person can really do is declare whether he laughed or not.

And so I’ll say this: John Scalzi‘s new novel, Redshirts

, has four quotes on the back cover (from luminaries Melinda Snodgrass, Joe Hill, Lev Grossman, and Patrick Rothfuss), all of which make a point to note how funny this book is. On the other hand, I didn’t laugh or smirk before page 120 out of 230 pages of the novel proper [1], and, even after that point, there were only a couple of wan smiles and some light chuckles. This reader must then humbly submit that Redshirts did not strike him as funny as it did the blurbers, and that will inevitably color the rest of this review. Please set your expectations accordingly.

I’ve read all of Scalzi’s novels to date, and grumbled about all of them, which proves something, I suppose. (Probably about me, and probably nothing good, either.) I’ve come to realize that I’m engaging in the common but fruitless effort of wishing that Scalzi was a different writer — or that he were interested in writing different kinds of books — than is actually the case. He clearly has it in him to write “serious” SF of weight and rigor — the mostly-successful novella The God Engines (see my review) shows that, as does his best novel, The Ghost Brigades (which I covered in a more cursory manner) — but it’s also becoming clear that he doesn’t want to be a “serious SF writer,” that he’s more in the vein of Keith Laumer, James H. Schmitz or H. Beam Piper, writing zippy novels set in mildly generic universes with wisecracking heroes who always win out in the end. (I didn’t review his first novel, Agent to the Stars, but I did also cover Old Man’s War, The Last Colony — and then a follow-up on the Old Man’s War-iverse in general — The Android’s Dream, Zoe’s Tale, and then last year’s Fuzzy Nation, so the really devoted reader can trace my history of looking for things in Scalzi novels that I should not expect to find there.) Thus, Redshirts — a novel set in a deliberately generic medium-future setting, with plenty of elbows to the reader’s ribs and references to SF media properties that we are all already familiar with [2], that almost but not quite turns into a giant fuzzy-dog story along the way — is exactly the novel we should have expected from Scalzi, and the reaction to that novel (it’s already hit the New York Times bestseller list) bears that out.

Which is all a long way around saying that Scalzi’s work is deeply resistant to criticism (if not entirely invulnerable to it) and that I, personally, am not well-placed as a critic to do justice to Redshirts in the manner it deserves. (Which would either be an excoriating attack on its flabby second-handedness — though that would also be entirely missing the point; it’s second-handed on purpose — or a loving appreciation written either entirely in Klingon or in quotes from famous TV sci-fi shows, a la Jonathan Lethem’s “The Anxiety of Influence.”)

Redshirts is a slobbery sheepdog of a novel, eager to show off its good nature — it’s a quick, easy read, full of snappy dialogue delivered by characters without too many attributes to confuse the reader and delivered, for the most part, in little-described interior spaces, so as to keep the narrative from being cluttered up by action or description. It’s set in a very Star Trek-y future — very original series Trek, to be precise, for maximum audience identification with the premise and the least amount of friction for Scalzi’s few twists in the tale.

The year is 2456, and the Federation Universal Union has just assigned young Ensign Andrew Dahl to the flagship, Enterprise Intrepid, where he soon learns that junior and low-ranked crew members — whom we know as “Redshirts,” though Dahl doesn’t — die at an unusual rate, and because of exceedingly unlikely events, during “Away Missions.” Dahl, and his fellow not-terribly-well-characterized Ensigns [3], do not want to die, and so they try to figure out why this is, eventually turning to the creepy loner Jenkins (who lives, alone and hidden, in the Jeffries tubes cargo tunnels deep within Intrepid), who has a theory So Crazy that it just might be true.

That theory is amusing, and would be even more amusing at about 2 AM in some convention party, anytime in the past forty years. But it doesn’t lead — in my opinion, of course — to anything really funny afterward, just another succession of scenes of not-well-characterized people shooting mildly-witty dialogue at each other in some more undescribed rooms for another hundred pages until the novel ends. The first half of Redshirts isn’t frightening or ominous enough — and God Engines is proof that Scalzi can do really ominous danger-on-a-starship, when he wants to — and the second half isn’t as big or funny as it should be, either. (It resembles, more than anything else, a rewrite of one particular Star Trek story.)

Redshirts is content to be amusing and pleasant, rather than digging any deeper. It is not a failure in any possible sense of the term, but it may leave some readers wanting more, particularly if they’re long-time SF readers who have seen Redshirt‘s Phildickian premises used more evocatively and subtly by other writers. If you just wondered what a Trek redshirt might have thought about his predicament, and aren’t expecting much, you will enjoy Redshirts. If you hoped for a more complicated, interesting answer to the predicament of high-casualty crewmen, I’d suggest instead looking for the excellent (and mostly ignored) novel Expendable

[1] There are also three “codas” — related short stories — which add another 90ish pages to the book. They’re in different modes, though, and none of them are funny — none of them seem to aim at being funny, either. They’re the best writing Scalzi does in this book, and that plus the example of God Engines implies that Scalzi is deliberately tuning his novelistic output to a particular market.

[2] My reaction to the use of these as “jokes” is approximated by this T-shirt.

[3] Scalzi eventually has a clever in-universe explanation for this; Redshirts is quite cleverly designed to be precisely the way it is, though one must wonder if spending that much energy emulating mediocrity is really worthwhile.