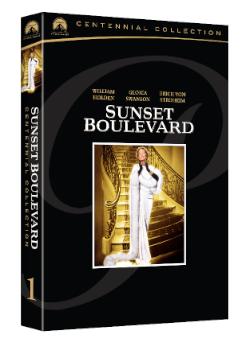 The cult of celebrity has been with us for millennia but it really entered a new phase when everyone could see and react to the same experience, such as the era of Silent Films. From coast to coast, people could see the same story performed the same way and it helped bring people together as many performers suddenly became household names and were the first people haunted by the paparazzi.

The coming of sound altered the cast of characters and many notable stars could not handle the transformation and faded from fame and memory.  That tragic reality became the premise for Billy Wilder’s brilliant Sunset Boulevard

which is the lead title in Paramount Home Video’s new Centennial Collection. The first three volumes were released last week and we’ll be looking at them over the next few days.  Each comes in a heavy cardstock box and provide you with two discs – the actual film and all new extras plus an 8-page booklet. Overall, the numbered cases look very nice side by side.

The story of Joe Gillis, a struggling screenwriter, who accidentally enters the warped reality of silent film star Norma Desmond, has long been entrenched as a classic. Gillis’s seduction is slow and careful as Desmond reels him in with charm and money.   The idea that he could turn her mountains of pages into a script and sell it, making his name and erasing his debts, is more tempting than his original notion so he goes along.  What he slowly comes to realize is just how far from grace Desmond has fallen, her ego fed by her former director turned caretaker, Max.

The performances by William Holden and Gloria Swanson still hold up today, thanks to Wilder’s strong script and visual direction.  On the disc, the remastered print brings out subtle shadows and shades that enhance the creepy atmosphere of the mansion that becomes his home and remains her asylum.

Disc 2 provides a wealth of extra that set the tone for the discs that follow.  There’s [[[Sunset Boulevard: The Beginning]]], which offers up the usual assortment of information on the film came together. Novelist Joseph Waumbagh largely narrates [[[The Noir Side of Sunset Boulevard]]], taking a closer look at a neglected aspect of the film. Other pieces have the surviving actors reminisce in [[[Sunset Boulevard Becomes a Classic]]], [[[Two Sides of Ms. Swanson]]], and [[[Stories of Sunset Boulevard]]]. Archival footage of Swanson herself talking about the film is well used throughout.

There’s also a piece on Holden that largely focuses on his career up to making this film, saving the full retrospective until volume three.

As part of the centennial celebration, you get a look at the Paramount Lot from its silent film days through its merger with Desilu in 1967 that shaped the studio as it is today. There’s also a clip-filled look at the studios’ output tin the 1950s which largely informs the first 5-6 offerings in this collection. Original script pages, trailers and other treats await the connoisseur.