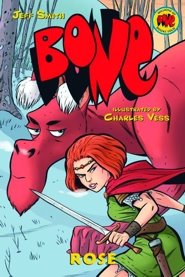 Rose is, of course, Gran’ma Ben, the strong, cow-racing elder figure introduced early in Smith’s saga. Her sister, Briar, is The Hooded One, an evil crone, but as we’re about to learn, they were once young and far more carefree.

Illustrated by Charles Vess, the story is very, very different from Bone, much more a cautionary tale and almost devoid of the humor that kept Bone such a great read. Instead, the book focuses on Rose and Briar, both in training to become leaders of Atheia. Rose is exceptionally strong but not at all focused, prone to distractions while Briar is disdainful of her more popular sister, insisting Rose will be the chosen one. When they journey to Old Man’s Cave for the final testing, the young women are drawn into the Lord of the Locusts’ attempt to achieve freedom from its stone prison.

Smith’s story works on many levels, starting with the relationship between the sisters, which rings true. The responsibilities that comes with being princesses weighs heavily on both and where Briar accepts them with solemnity, Rose struggles to follow her muse. Accompanied by her favorite dogs, with whom only she can converse, she seeks adventure wherever she goes. That includes the cave and the final testing, which turns out to be a struggle between Rose and a freed River Dragon, which now threatens the residents in the Northern Valley.

Rose has to make a promise early on and then live with the consequences of that obligation at story’s end and how it shapes her personality, which sets up the more familiar Grandma figure.

Vess, a highly celebrated fantasy illustrator, adapts his lush style to Smith’s world so the Red Dragon is a visual link to the Bone series. His color work is subtle and helps establish this as a related work.

There’s a reason Neil Gaiman said, “A magnificent prequel to Jeff Smith’s Bone, but it’s more than that – – it’s a beautifully painted meditation on magic, on the mistakes of youth and the little personal tragedies that grow to decide the fate of nations and to engulf the world.”

Unlike Bone, Rose is a bit more graphic in its violence and is probably not for the youngest of readers but is highly recommended to everyone else.