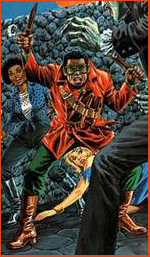 If you have not done so, please read last week’s article. Thanks.

The opening night of the movie Blade, I was sitting in a packed Magic Johnson Theater in the Crenshaw district of Los Angeles. Crenshaw is a predominantly black community, so needless to say the crowd for a black superhero movie in a black neighborhood in theaters owned by a black sports superstar was overwhelmingly Jewish. The Jews, they so love to hang in the hood. Black hats, long black coats – they roll big pimpin’ style.

I kid, I joke. The audience was crushingly African American. There was a lot of excitement in the crowd. When the lights went down the audience started to clap and that’s rare in a black movie house. To have a black crowd clap for a movie before they have seen it is extraordinary.

Black people rarely do that. We take our leisure time seriously. We are also very vocal about entertainment and we expect our monies worth. If a black crowd does not like a film – no that’s wrong – if black people don’t like a movie we will not be shy about voicing our opinions immediately.

Yep. I freely admit we can be a bit loud in the movies but for us it’s part of the show. To be fair we only tend to get loud during action and horror movies. You will seldom hear, “Yo! Henry Fonda! Don’t get in that motherfucking row boat!” during a screening of On Golden Pond.

Black people by in large don’t go see a film. We go to the movies. What’s the difference?

Still confused? OK, try this. A film is a motion picture that many may consider art. A film will have these elements in it: a story, a point of view, and a message.  It will make little or no money but will win lots of awards and always features white people.

A movie will have these elements; some kind of story that won’t be important, shit that blows up, sex, violence, vampires, it will only win special effects awards, it will make tons of money and always features white people.

But, (man, I wonder why Peter David hasn’t pimp slapped me yet) I digress… As I was saying, black people take our movie going outings very seriously. We don’t clap just to clap (that’s why we have sex), we clap to show appreciation for the work. So the reaction by the sold out crowd at the Blade opening was quite the pleasant surprise to me. Clearly some of the applause was because this was something rarely seen in movies, a black superhero.

When the credits began Wesley Snipes got quite an ovation and the crowd continued giving props to some other recognizable names. Then up on the screen came this gem: “Blade created by Marv Wolfman and Gene Colan.”

“Oh, yes!” I screamed like 40-year old woman who just had her first orgasm after being married for 20 years. “Oh hell yes!” Much, like I imagine that 40-year old woman would react, I did not notice that everyone else had stopped hollering and were looking at me. A large, as in large like the Hulk, man noticed my outburst had occurred during the “created by” credit.

“What you yelling for?” He asked. “I know Marv Wolfman, one of the guys who created Blade.” I said, hoping this guy wasn’t a Crip because I had on a red sweater.

What? Is he a brother? Marv Wolfman? I mean come on! Before I could answer I noticed that there were others listening and realized that I could dampen the mood of the crowd. But I’m not a lair so I told him the truth.

“Right on!” Someone shouted!

That was a great moment in what would turn out to be a great night.

The move was wonderful. The crowd loved every minute of it and me? I was in cloud nine.

Blade was a great movie. It featured a black superhero but it was not a “black” film. Nope. It was a superhero movie, period. Not long afterwards I ran into Marv Wolfman at Comic Con in San Diego. I recounted to him my interaction with the Bulk (black Hulk, get it?) and he was pleased as can be. Up until I told him he did not know that he had gotten an entire card in the credits. A “card” is what the credits are called in the industry it’s a big deal when your name is the only name on a card or is shared with just one other name. Big Deal. Marv created Blade at a time when black superheroes were few and I mean very few. Here’s the kicker: Blade does not have to be black.

Blade could be just another white guy who kills v. The character works just as well as a black character as it does a white character. Marv created a good character and that’s why it works.

I’m of the opinion the color of the character really does not matter as long as the character is a good character. That said I’m a comic book fan first and I get a little pissed when a character I’m familiar with in the comics has a race change in the movies. You would think that as a black man and a black comic book creator I’d be happy that Nick Fury was turned into a black man.

I liked Nick Fury as a badass white super spy.

That’s because of the Steranko comics. Jim Steranko’s Nick Fury, Agent of S.H.I.E.L.D. was one of the greatest comics ever! When Fury was changed in The Ultimates it pissed me off. When I saw Samuel L. Jackson as Fury in Iron Man it pissed me off even more.

I want my comic book heroes to be like the comic book. I can hear some black people now “Man we need more black superheroes… and you’re stupid, Davis!”

I know we need more black superheroes, but Nick Fury will always be the cool ass super spy white guy in the Steranko comics to me.

The fact is I care that Nick Fury is not white in the movie because he’s white in the comic book. Did it stop me from seeing The Avengers?

Did I like Sam Jackson as Fury? Damnit, yes, yes I did. Did anyone seem to care in the two sold out showings of the movies I sat through that Nick Fury was black?

Did Blade not make a zillion dollars and spawn two sequels?

And speaking of Spawn (damn I’m clever) did Spawn, another black superhero, not make a grip in movies, television and toys?

Was Static Shock (still seen in reruns to this day) not one of the highest rated animated shows on television?

I’m told often, black doesn’t sell. Clearly that’s bullshit. Just ask Will Smith, the biggest star in the world. He has played a few superheroes and all made serious bank.

With these examples and many more why does Hollywood still think that “black means death” when it comes to black superheroes?