Mike Gold: How The Rest Was One 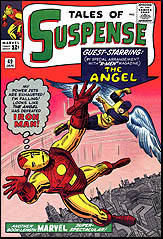 Remember crossovers? Way back in the day, they were the biggest deal in comics.

They were so rare that, in Marvel’s earliest days, a crossover between Iron Man and The Angel was “by permission of the Uncanny X-Men.” The whole Earth-One / Earth-Two thing at DC was breathtaking, a fan’s wet dream. Heck, we even thrilled when Blackhawk simply mentioned Superman.

Maybe the most significant crossover of that time was when The Fantastic Four encountered The Hulk. It was published the same month that The Incredible Hulk was cancelled… but it was so successful that a year later The FF brought in The Avengers to help in their rematch with Bruce Banner’s alter-ego – in a two-parter, no less!

(Yes, back when crossovers were relatively few and far between, two-part stories came about as often locusts.)

Today, crossovers are no longer a big deal. Actually, they’re no deal at all: continuity is so tight and the universes are so integrated that each character’s individuality is subservient to the fabric of its universe. If there was a crisis so big that it attracted the entire Marvel or DC universe, the bigger crisis would be the resulting traffic jam.

Now before you think this is a “Hey, kids, get off my lawn” moment, please rest assured I enjoy the current tightly integrated universe approach. By and large, they do a great job of it over at Marvel and I suspect DC would do a pretty good job as well if they ever decide to go three years without a reboot.

Recently we’ve been experiencing the merging of both approaches over at Dark Horse. Back when, they had themselves a line of superhero comics called “Comics Greatest World.” I enjoyed much of it: they were well done (some, of course, more than others) and together they expressed a different worldview. This is the critical element often lacking in many “new” superhero universes.

But what’s cool is that they’re slowly reasserting Comics Greatest World. Not rebooting it, and barely relaunching it, this effort mostly focuses on their new series bringing back their character Ghost. It’s clearly still set in the CGW universe and characters from that universe appear in the series… perhaps, and presumably, as a launching pad for future series, mini and otherwise.

Seeing as how I enjoyed that worldview and the original CGW launch, I wish them luck. And it would be pretty cool if these current efforts don’t overplay that tightly integrated universe thing and restore, in a small way, the uniqueness of the genuine comics crossover.