Marc Alan Fishman: The Top 5 Comics I’d Like To See 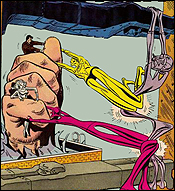 In an effort anger the Internet – and save me the time of writing too much – I figured this week I’d take a trip into Fantasy Land. Here is a list, simple and to-the-point, of five books I’d love to see hit the stands. This probably won’t happen unless we’re on Earth 29.

The Avengers: Written by Geoff Johns, Art by Peter Krause.

With his ability to handle a multitude of characters (see his run on Justice Society, or to a lesser degree, Justice League) and draw from countless years of continuity to craft original tales, John’s would deftly deliver a truly epic arc for Earth’s Mightiest Heroes. Peter Krause (of Irredeemable fame) has an amazing ability to show emotion, and a wide range of your more traditional superheroes. Put together? I think the fans would assemble in droves for a chance to see the premier Marvel team run through the proverbial wringer. And with John’s latent ability to hone lesser villains (see Captain Cold, or his subtle shifting and deepening of Sinestro), no doubt this impossible title would be one for the ages.

Brian Michael Bendis could do perhaps what no other writer has done for Hal Jordan in the last 10 years of his comic booking career: he could make me give a damn about Hal. Bendis, master of the talking head page, could instill the much-needed pathos to what has basically been a cardboard cutout of a hero since his “rebirth.” Given his pedigree and ability to craft subtle, nuanced characters, I’ve little doubt his emerald knight would finally be a human being, akin to the Ultimate Peter Parker, with far more years under his power-ringed belt. And with Mike Norton’s clean, concise, and emotive style? Well, I think the book would look as sharp as it read. Norton’s often forgotten runs on Blue Beetle and Green Arrow proved to me long ago, he’s the go-to guy when you need stalwart presentation.

DC Kids Cavalcade: Written by Art Baltazar, Franco, and Keith Giffen, Art by Katie Cook, Art and Franco, Jill Thompson, and a Troop of Others.

Yeah, yeah, yeah. I know. “Anthologies don’t sell.” Well, maybe they would if the stories and art in them wasn’t always a crap shoot, maybe it’d have a chance. I’d kill to see a monthly rag where the funniest minds in comics met with an endless parade of the most kid-friendly artists. Give us a chance to see Katie Cook’s Batman saga or “Tails From The Litter Box: The Midadventures of Dex-Starr.” Pair Giffen’s sharp wit with Art’s never-not-cute style. What could be more perfect for young readers, than a never-ending series where each issue packs in a brand new kid-friendly (but with plenty of Easter eggs for adults) tale? Nothing that I can think of, darn-it.

No, I’m not just pandering for my close and personal friend John Ostrander. OK, maybe I am a little. But hear me out. Ostrander’s original run on the Suicide Squad is just an amazing piece of sequential fiction. His ability to mine realism in the face of the absurdity of comics is unparalleled. Match this with the wit and charm of Gail Simone? You get yourself one fancy-assed book about ne’er-do-wells. It stands to note I found Simone’s Secret Six to be the sleeper hit of DC in the mid-aughts. Certainly her pitch-perfect evil side would pair well with John’s, and together they could craft a story about Marvel villains trying to change the world. Since Marvel doesn’t really have an “evil only” book per say, I’d think this’d be an interesting one to see. Pair them with Gail’s buddy Ethan Van Details? And you have a gory and beautiful mess on your hands. Van Sciver’s meticulous style would be great to see, when there’s no forced lighting, constructs, or fire being forced into every panel. When its time for poop to hit the fan though? There’s no one better for the art duties.

Last but not least, a title so impossible to exist, 14 editors just burst out laughing over how unsellable it’d be. This iteration of the Metal Men would be a mash-up of sorts. Fraction has proved he’s got the uncanny (natch) ability to build slow, methodical tales without boring his audience to tears. And based on his most current work on the Defenders, he’s proven he can be witty to boot. Pair him with the “in-the-prime-of-his-career” Burnham, whose carefully crafted dynamic figure work is second to none, and you have a book that’d look as sharp as the titular metallic men in question. Fraction could world-build around the odd duck Doc Magnus, but not lose the fun always associated with the franchise. Toss in some climactic battles with new versions of Chemo, Animal-Vegetable-Mineral Man, or Monsieur Mallah and the Brain… and you have a perfectly unsellable train wreck – that I’d buy 10,000 copies of.

What? Boys are allowed to dream!

OK, Internet. Time to tell me how wrong I am! Or better yet? Pitch your impossible book below. We’ll take a vote, make a petition, and incite riots for the best idea. Now, go do that voodoo that you do so well.