FORTIER TAKES ON ‘HELL IS EMPTY’! 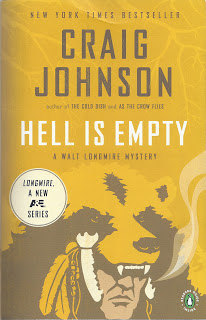 HELL IS EMPTY
(A Walt Longmire Mystery)
By Craig Johnson
Penguin Books
309 pages
“Hell Is Empty” is as much about the Bighorn Mountains of Wyoming as it is about the people who live within their shadows.  Absaroka County Sheriff Walt Longmire is transporting several prisoners to an out of the way wilderness locale to unearth the remains of a slain Indian boy murdered by one of the convicts; a psychopath named Raynaud Shade.  Upon meeting Longmire for the first time, Shade tells him he hears ghosts and believes the sheriff possesses the same ability.  Longmire, having fulfilled his duty in getting this human monster to the site, packs it in and starts down the mountain.
Within hours of digging up the boy’s bones, the convicts, following a plan devised by Shade, escape; killing several federal agents and marshals in the process.  When the news reaches Longmire, he realizes he’s the only lawman left on the mountain able to give chase and sets out after the killers alone.  Thus begins his incredible journey that will ultimately test both his body and his spirit as a savage winter storm is descending on the mountains and becomes a deadly participant in the drama.
Johnson’s title; “Hell Is Empty,” is an homage to Dante’s classic fantasy, “Inferno,” where the lowest levels of hell are not hot but numbingly frozen over much like the very peaks Longmire must conquer to capture Shade and save the female marshal he holds  hostage.  Now a resident of Colorado, I am daily reminded of the power and majesty of these mountain ranges and threat they pose to any who venture into them naively without the proper outdoor skills.  This book is more an adventure odyssey than a mystery. Longmire must confront his own inner demons while climbing higher to reach the snow blanketed Cloud Peak which is Shade’s final destination where both will confront each other in a primal contest of good versus evil.
The book is multilayered and despite it Heminwayesque narrative style, Johnson adds a new twist by having his protagonist guided by a giant Crow warrior called Virgil White Buffalo; his version Dante’s Roman poet guide. There is a crucial connection between the giant Virgil and the fleeing killer that Longmire slowly uncovers as the pair make their way through the brutal storm.  Soon the physical suffering the sheriff has to endure begins playing tricks on his consciousness until the reader realizes his companion may simply be the hallucination of a fevered mind.
“Hell Is Empty,” is the seventh book in the Walt Longmire series by Johnson and a terrific, gripping read unlike anything else on the market today.  It is fresh with interesting characters and skillful in its economic storytelling.  As the book’s cover announces, the series has been turned into a new A & E television series that will soon premier on Sunday evening June 3rd and features Australian actor Robert Taylor as Walt Longmire with Katee Sachofff of Battlestar Galactica fame as his chief deputy Victoria “Vic” Moretti and Lou Diamond Phillips as best friend, Henry Standing Bear. If the show is as much fun as this book, then we’re all in for a treat.
Share