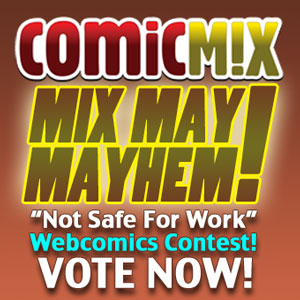 This year’s Mix March Madness Webcomics Tournament was incredibly popular, but we did state that we weren’t including comics that can best be put under the heading of “not safe for work”. But there are a lot of good webcomics that fall in that category, and strips like Oglaf and Menage a 3 shouldn’t be ignored just because of some naughty bits here and there.

So we’re opening it up to you. We start with you nominating NSFW webcomics. Later this week, we’ll put your nominees into a voting pool to get the top contenders and then at the start of May, we’ll reveal the brackets and start the contests!

We do have a few guidelines:

1. No comics on hiatus. Our rule of thumb is “has published an installment since January, and two since the start of 2012”.

2. No comics behind paywalls. We know this will be a big barrier for many adult comics, but we consider it antithetical to the free and open environment of the web… and if we can’t see the material, we can’t be sure it doesn’t run afoul of our third guideline:

3. No obscene or illegal comics. Yes, that means the Miller Test will be applied to the comics.

Oh, and one more thing: give the title of the comic AND the URL so we can look for ourselves. Nominations will close on Friday at Noon. Get to it and surprise us!