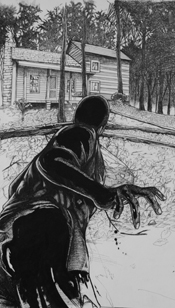 Please read the past three week’s installments before reading this. Thanks!

What has gone before, quick and dirty recap… I’d sold (in my opinion) the second greatest idea in the history of comics to one of the greatest publishers (DC Comics) in the business. It was to be written by one of the greatest writers  (Dwayne McDuffie) with art by a guy (me) who was going to make sure this time he got it right. The editor assigned to it wanted me off the project I created. Dwayne told the editor he would not do the project without me.

I told the editor to kiss my ass (at a bar during the San Diego Comic Con some years after all this went down and after Jenette Kahn had left DC). See previous installments as to why I didn’t tell him to kiss my ass while Jenette was there.

What did the editor say?

Nothing. When’s the last time you’re heard a pussy talk? Me? Last Friday but that was …well … you know…

I took the project to Dark Horse.

Mike Richardson runs what is without a doubt the coolest entertainment company in the world in my opinion. Dark Horse does movies, comics, television, animation, toys, collectables and just about any other cool pop culture stuff you can think of.

Mike is not just the founder, owner and CEO, he is also the driving creative force behind Dark Horse. Having a project at Dark Horse is not just cool, its prestigious as well.

Sin City, Hellboy, The Mask, 300 are among the Dark Horse comic projects that have gone on to be come huge movies and merchandising juggernauts. If any project has a chance of becoming something beyond comics, having Dark Horse as your publisher helps tremendously.

Mike gave me my marching orders, which were to come back with a detailed outline of the story, and I did. I came back over and over for five years. 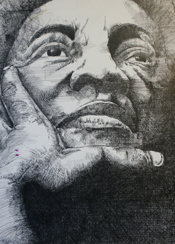 Or 35 years in the DC editor’s life. Why 35 years? Because he was and still is a little bitch.

But (sorry again, Peter) I digress…

Allow me to make another aside to the young creators out there. I have two mottos that I live by…

Just to be clear, Mike Richardson and I did not meet every week or so for five years. We met numerous times to go over the story but there were times when we would meet in April and the next time it would be in May.

May of the next year.

When you are dealing with the head of an A-list entertainment company you have to realize that they have a lot of other stuff to do.  Often Mike would be out of town, way out of town like in Prague filming Hellboy or in Japan working on a toy deal or in San Diego at Comic Con where he stabbed me through my heart…long story.

Before your mind goes to dark places, he stole a toy out from under me at a vendor during Comic Con. That’s how he stabbed me in the heart…and he never called.

So young creator: remember a deal takes the time that it takes. If you think countless phone calls and emails are going to make a difference, you are right.

Countless phone calls and emails will make a difference. The difference it will most likely make is you will phone call and email yourself out of a deal. Nobody likes a pest.

We went back and forth on the story until Mike called me one afternoon and said; “Let’s get rid of the superhero element.”

That’s what Mike had been struggling with during my many revisions to the story.

The story was a superhero story that dealt with a certain time in American history. Mike realized all at once that the history was more important than the superheroes.

This under any other circumstances would have been a deal killer for me. That was not the idea that Keith Giffen said was one of the greatest ideas he had ever seen. This was no longer my dream project.

It was a great project and more importantly it was a story that needed to be told.

Soon after we had that talk I turned in my new story overview and Mike said “Go do the book.”

That was three years ago.

I’ve been working on that graphic novel for three years. The comic book work I’ve done in the past has been me trying to do comics the way others do comics. I’m not that type of artist and I’m not making that mistake again.  Graphic novels are done in as many styles as there are artists and I’m not taking any chances that I’m not true to how I work and how I work is a bit involved and tedious.

My pen and ink style is a wee bit time consuming.

I’m including examples of the Dark Horse project with this article. Mike Richardson has not even seen this work yet. I’m not showing any story pages, as I’d like to keep the story under wraps for a bit more time.

As I hope you can see from the art, the work is a bit time intensive.  All of the originals are 20 x 30 inches, double or single page spreads.

That being said-my project at Dark Horse has an opened ended deadline, meaning I have the luxury of turning the project in when I want.

I have that luxury.

If any young creator is on a deadline but thinks they can turn in a project whenever they want just so they can get it right that creator at risk of becoming an asshole of the highest order and at a higher risk to be unemployed.

The Dark Horse project should be done this year, and I’m as happy as Mitt Romney’s dog was when he came down off that car roof. It’s a major graphic novel from a major publisher and Mike Richardson is one of the greats to work with not just in comics but the entertainment business.

But, you ask, what about the original earth shattering idea?

Well, I’m glad you asked. Last year at Comic Con I met with the head of another major comic book company who expressed great interest. We met again last November and he was still very interested I was told he would get back to me in two weeks to see rather or not it was a fit within his publishing plan.

Two weeks turned into four months. We met again briefly two months ago and he said he would get back to me shorty.

So far it’s been six months and I’ve heard neither yay nor nay.

That’s really not a big deal. Really it’s not. I’ve been waiting to do this project for over ten years, so six months is nothing. I’m also dealing with the head of the company so he’s got a lot on his plate. I don’t take any of this stuff personally.

Similarly, I’m a busy guy. I’ve writing three books (novels, not comics) and I have another graphic novel project as well as a TV show in development. Moreover I have a couple of other little things I’m doing, so like I said, I’m a busy guy so I was fine with waiting.

I was fine with waiting.

A. Pull the project from the publisher who has had it for six months and take it to the new publisher?

B. Do I give the publisher who has it as much time as they want to make a decision?

C. Do I tell the publisher who has the project to shit or get off the pot?

D. Do I not say a word to the publisher who has the project and let them know when the new publisher announces it at the San Diego Comic Con?

A is an asshole move.

B is simply a stupid move with another power player in the game.

If I were the old Michael Davis, it would be D. I’m not that guy anymore.

So that leaves C.

On Monday April 23rd (tomorrow to me, yesterday to you) I’m sending a very nice email to the company that has my project and I’m saying very nicely to them please make a decision.

I know what they are going to do. I’m real good and according to many, I’m scary when it comes to predicting what others will do.

My birthday is a week from the date of this writing. That’s next Sunday, April 29th.

I’m sure I’ll be celebrating Project X and a new deal.

That’s a great gift. In fact it will be a first.

WEDNESDAY: Mike Gold Thinks Up Something Just In The Nick Of Time