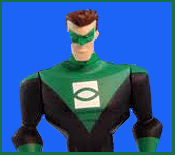 Typing that title hurt. A lot. It’s been stated here time and again: I am a Kyle Rayner fan. Here I sit, sarcasm sitting in its glass jar next to me, legitimately about to make the argument that my favorite character in comics be given a dirt nap… and I don’t mean the Steve Rogers–Bruce Wayne dirt nap kiddos. I mean the Gwen Stacy sleep of the pulpy gods. But why, you ask, would I suggest such a fate to the character that inspired this bearded bloke to make comics himself? I paraphrase Dr. Denis Leary:

“Elvis Presley should have been shot in the head back in 1957. Somebody should’ve walked up behind Elvis in ‘57 with a 44 magnum, put the barrel of the gun right up to his brainstem and just pulled the trigger, so you can remember Elvis in a nice way. Wouldn’t it be nice to remember Elvis thin, with a big head of hair? Maybe that gold lame suit. Wouldn’t that be nice? Because how do you remember Elvis? You know how you remember Elvis. He was found in the toilet with his pants around his ankles and his big fat hairy sweaty king of rock and roll ass exposed to the world and his final piece of kingly evidence floating in the toilet behind him!”

Kyle Rayner was brought into the fold of DC Comics in January of 1994. After they wrote off Hal Jordon as a villain-turned-martyr, they introduced new blood into the comic. Kyle represented everything Hal didn’t. He was timid, indecisive, and anything but fearless. All he was, was a kid with an amazing imagination. A kid given the ultimate toy, and a universe to save. For lack of a better M.O., Kyle Rayner was DC’s Spider-Man. An everykid being shown that with great power rings comes great responsibility. It was a bold move. And over ten years he was given free reign to learn, and grow. I grew with him. Kyle joined the Justice League (during the fantastic Morrison run), and became the POV character we could get behind. While Batman, Superman, and Wonder Woman were the serious heroes, Kyle was the kid who could still yell “cool!” Simply put, with Kyle Rayner, DC had the bold and inventive reboot they’re so desperate to have now.

In 2005, Dan DiDio and Geoff Johns decided that the comic book world had enjoyed too much of this “modern” era and declared the silver age be reborn! Hal Jordan was resurrected, and with it took every last ounce of thunder Kyle had mustered in his 10 year tenure as the torch bearer. This is the moment folks, where, had I the will power, I would politely take Rayner’s ring and hurl it into the sun. Ever since “Rebirth” Rayner has floundered, flopped, and died a slow and pitiful character death. Ask ole’ Geoff or Dan, and I’m sure they’d feed you a brilliant line on how he’s still “relevant and as awesome as ever!”… Let’s go to the tape!

Since 2005, Kyle Rayner has… uh… got chummy with Guy Gardner… and… became Ion until they gave that to another alien we’ve since forgotten about… and … uh… got taken into Parallax for an issue… put on a blue lantern ring for a day… oh! And at some point his mom died, and he lost 17 girlfriends. Some died. Some blew up. Others turned out to have daddy issues. Ain’t it riveting?

Simply put, with Hal as the lead green meanie, Kyle fails to matter in the great scheme of things. As Barry Allen came back put Wally West out of a job, so too, does Kyle remain a waste of ink. The whole concept of legacy is so strong at DC (far more than Marvel…), but with the reboot, and continual Geoff Johning of the multiverse… legacy is fast becoming nothing more than an MMO title.

And so, this September, DC rebooted its entire universe. With Hal continuing to be the star of the flagship series (mainly because he was the star in a wonderful flop of a film this summer…), and John Stewart (affirmative action at it’s best!) and Guy Gardner (because we all love angry Irish guys, right?) over on GL Corpse (pun intended), what was Kyle given to do? Well, with GL: New Guardians… He’s the top banana in an adventure that will undoubtedly:

1. Have him shack up with a random space chick. And then she’ll die.

2. Have him wear a plethora of rings, resulting in him changing costumes 10 more times.

3. Remove any semblance of his character, and have him shout various generically heroic things as he saves the day.

4. At some point, he’ll mention all the good things he’s done as a Green Lantern, reminding us Raynernauts that he mattered there, for a while.

I’ve been through the first two issues of the series. I’ve yet to be impressed. It’s like a cattle call for all the last two years worth of Lantern D-listers, all brought together for yet-another-unforeseen-prophetic-battle. Rayner will end up working with Bleez (the slutty Red Lantern), Arkillo (the tongue-less Kilowog of the Sinestro Corps), the Orange jelly-bean thing from Larfleeze’s lantern, Fatality (the only character in the DCU to have even less to do since Kyle Rayner’s original run on GL), an Indigo Lantern (who we still know nothing about, nor care about at this point) and Saint Walker (all will be well, and have some milk!).

Two issues in and nothing has happened. Seriously. 40 pages of content that has seemingly set up a single final splashpage of him in some kind of White-Lantern getup. As if we haven’t seen that before?

Ultimately, if DC wanted to ‘shake things up’ with their reboot, it was the perfect time to shed some dead weight. Since the love affair with all things Silver Age is still in full swing, the world simply doesn’t need a Kyle Rayner. And as one of his biggest fans, I’d much rather have seen him retire his ring for a desk job… instead of continuing to not-matter in the grand scheme of things. He could take a seat next to Wally, and they could simply wait until the next crisis. Or until someone recalls why he mattered in the first place.