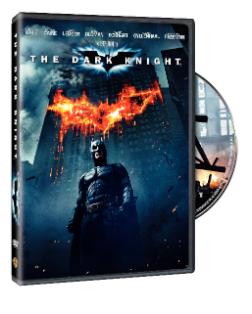 stunned movie audiences by taking the mature themes and tone of its predecessor, [[[Batman Begins]]], and amping things up by a factor of 10. The movie was hailed by critics for around the world and theatres packed in the crowds to the tune of $1 billion in box office (or thereabouts).

In rewatching the film on DVD, now out from Warner Bros., the film remains very strong thanks to terrific lighting, set design, and riveting performances from Heath Ledger and Aaron Eckhart.  Yet, the story doesn’t hold together as well.

First of all, Gotham looks and feels different from the first film from director Christopher Nolan. The city had been a character all on its own, with the architecture and monorail but now it just looks like, you know, Chicago. We don’t know how long its been since the first film, but since it ends with the Joker’s calling card, it can’t have been that long for a remake, and yet Batman’s legend is such that people are already out there being bat-masked vigilantes.

We know [[[Batman]]] is a presence, so much so that the criminal operations are suffering.  Enter, the Joker, a force of nature. The performance by Ledge is riveting because he makes you forget all about Cesar Romero and Jack Nicholson and creates something totally fresh. His desire to spread chaos in opposition to Batman’s sense of order becomes the film’s spine.

But, once you examine what happens next, things take an odd turn.

As the UK’s [[[Guardian]]] put it, when they named the film as having the most ridiculous plot of the year: “Wait, so the Joker really orchestrated that big truck chase just so that he could get caught and go to prison, then he could kidnap that guard and grab his phone to make the call to set off the bomb he’d previously sewn inside the henchman in the next cell? That would kill the guy who stole the mobsters’ money, thus enabling him to … er, what? Heath Ledger’s Joker may have been a psychopath, but he had a nerdish capacity for forward planning.”

Caught in the middle is District Attorney Harvey Dent (Eckhart) and his story gives the film a tremendous amount of gravitas.  Had we ended this film with the death of Maggie Gyllenhaal’s Rachel Dawes and the rise of Two-Face, we would have received the best cliffhanger you could ask for. (Gyllenhaal made a better match for Bale and Eckhart and gave Dawes some grit that Katie Holmes could not muster in the first film.)

Instead, Nolan, Jonathan Nolan and David Goyer decide to expend the Two-Face story in this somewhat bloated production.  The make-up effects are stunning and Eckhart sells it quite well. Rather than let the Joker live and Two-Face die, especially in light of Ledger’s death, the filmmakers made a strategic error.

Also, they forgot to make us care about Bruce Wayne.  Christian Bale growls nicely as Batman and looks pretty dressed as the millionaire but he essentially has nothing to do.  He supports Dent, pines over Dawes and that’s about it.  This is, after all, a Batman movie and after building up the character so well in Batman Begins, Nolan virtually ignores him here.

Instead he works on grandiose concepts such as the hero Gotham needs and the hero Batman needs to be for his city.  We end with Batman a fugitive and Gordon smashing the Bat-Signal but it didn’t have to be that way.  Batman is the city’s protector because its elected officials failed the populace.  It took a vigilante to attack the corruption which, as far as we know, remains. Gordon could rely on Batman when he could not count on the Mayor or his own forces.

Nolan is painting on a very large canvass with lots of grand notions and themes but somehow lost sight of his primary character and his relationship to the city that birthed him.  With luck, the third film will return its focus on Batman/Bruce Wayne and not spin out of control with multiple villains and excessive action sequences.

The plain vanilla DVD looks and sounds terrific with no extras.