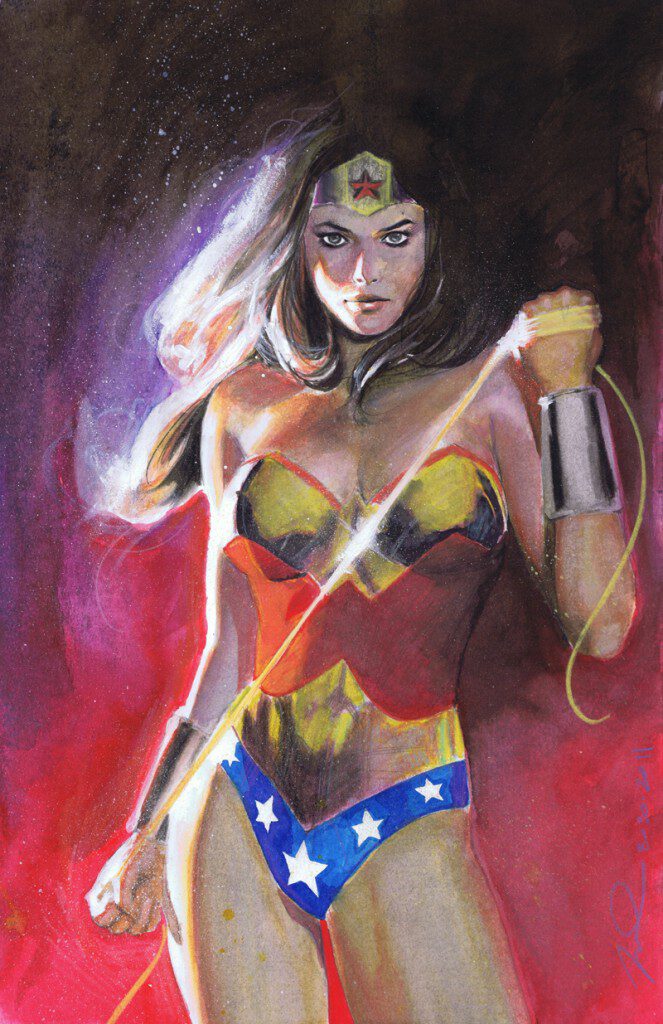 This year, the event will take on a new name and an expanded mission! On October 30, 2011, the new Women of Wonder Day — again as a part of National Domestic Violence Awareness Month — will take place, returning to Excalibur Books in Portland, Oregon, and Comic Fusion in Flemington, New Jersey, as well as at Heroes and Fantasies in San Antonio, Texas.

This year’s contributions for auction include not only artwork featuring heroines from the world of comics — Wonder Woman, She-Hulk, Storm, Michonne from The Walking Dead, Leetah from ElfQuest — but also from the world of media as well, including Lisbeth Salander, Buffy the Vampire Slayer, Hermione Granger, and others. Plus, TV series such as Glee, Nikita, The Big Bang Theory, Castle, and Chuck have donated special items as well.

An ALL AGES celebration and benefit for domestic violence prevention-intervention agencies! Proceeds of the event will benefit Bradley Angle, one of Portland’s leading domestic violence agencies. The free all-ages event will include local and national artists signing comics and special edition prints, as well as a silent auction of original art and collectibles. There will be costumed super-heroes, pirates, and science fiction characters on-site, raffles and prizes, and more.

An ALL AGES celebration and benefit for a domestic violence shelter will take place on Saturday and Sunday, October 29th and 30th, in Flemington, NJ, at Comic Fusion, as part of their “Super-Hero Weekend.” Proceeds of the event will benefit Safe in Hunterdon, a domestic violence shelter in New Jersey. Comic creators will sign and sketch, and costumed characters will be available for photos.

Stacy Korn is chairing the New Jersey event with Beth Delaney. Korn says, “From our first small event, this has grown into a Super Event our community loves! Super Heroes, Super Artists and Super Volunteers are all ready to put some smiles on faces. We look forward to raising money for such a worthy cause as SAFE in Hunterdon!”

Heroes and Fantasies, 4945 NW Loop 410, San Antonio, Texas
Sunday, October 30, 2011 — noon-5pm — FREE
An ALL AGES benefit and celebration for Domestic Violence programs at Family Violence Prevention Services of San Antonio! The free all-ages event will include local and national artists signing comics and sketching art, as well as a silent auction of original art and collectibles. There will be costumed characters on-site, raffles and prizes, and more.