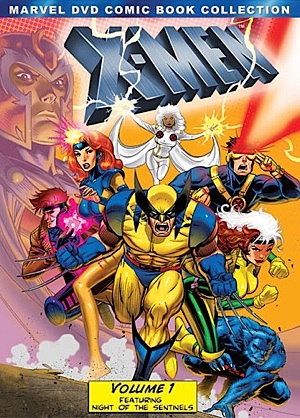 In the 1970s, Chris Claremont was arguably the first comic book writer to advance Stan Lee’s style of writing for the Marvel super-heroes, delving deeper into his characters and exploring what it meant to be born a mutant in a world that feared the different. As a result, much as everyone glommed onto [[[Spider-Man]]] in the 1960s, Chris’ [[[X-Men]]] in the 1970s became the new standard for popularity.

Television was slow to recognize the resurgent popularity in super-heroes, not really adding a comic book to screen adaptation for years until [[[Batman: The Animated Series]]] debuted in the wake of the wildly successful Tim Burton film. With its critical acclaim and ratings success, the networks began looking for other series and they finally learned how popular Professor Xavier’s students had become in the intervening years.

Marvel Animation produced a very faithful comic book adaptation which debuted October 31, 1992 and ran for five seasons, totaling 76 episodes. It was the tipping point in making the franchise a big deal for merchandise and eventually, the long-awaited live-action film version.

The first 33 episodes have been collected into two volumes, released Tuesday by Buena Vista Home Entertainment, cannily in time for the [[[Wolverine]]] hysteria. The first volume of X-Men

Whereas Bruce Timm and company were heavily influenced by the Fleischer Superman cartoons and wrote done-in-one stories with unusual maturity for animated fare, the crew behind the X-Men tried to adapt the modern comics beat for beat with mixed results.  Both were ratings grabbers, each debuting that season, but it was [[[Batman]]] that won the awards and critical acclaim because of their approach.

In watching these stories for the first time, it’s easy to see the animated short cuts taken. Storm could magically transform from street clothes to her white outfit and discharged lightning from her hands as opposed to summoning it from the sky. Wolverine had metal implants on the back of his hands for some reason, possibly implying the claws weren’t part of his skeleton or that his skin ripped each time they popped.

The voice casting is atrocious and jarring on more than one occasion while the animation direction is lackluster. Too often the team arrives to fight someone and we see them move one at a time rather than in a coordinated team effort, leaving you to wonder what the rest were doing while each hero took a turn.

What the series successfully did was to show that all was not rosy having “gifts” that set them apart from “normal” people. It tried to show growing camaraderie, growing affection, and the adjustments each made to working in a team environment. That so many of the stories were continued, like the comics, was also unusual for its time and allowed the more expansive tales to be told.

The writing, though, was all surface and lacked any sense of subtly or complexity, the very things that made us sit up and notice what Claremont was doing back in the day.

The DVDs come without any extras and are really for a generation who grew up on these cartoons, not for those of us who encountered thecharacters and these stories first in print.