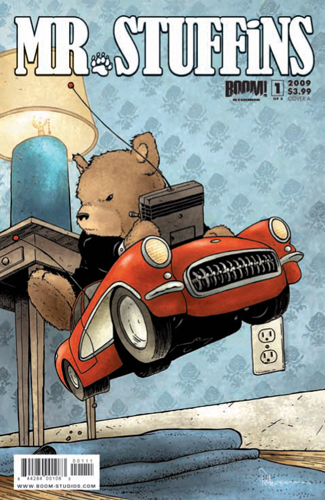 Greetings, ComicMixers and Mixettes… I come to you today from the future. I’ve just returned home from a trip to the cinematorium (back in 2009, you would have referred to it as a “movie theatre”). I caught a wonderful little film based on a comic book series I have time tracked to debut this week. The book? BOOM! Studios’ [[[Mr. Stuffins]]]. While the film followed the source material closely, for this reviewer there was just a bit too much sex and violence. Who knew even in the future movies would still differ from their literary counter-parts such as to enhance the boom-booms and the titillation. Feh, feh I say!

Ok, I jest. I’m not from the future. And there’s no film (yet) for Mr. Stuffins. That being said though, I did read the first issue of this series, and it was a delight. If the quality of the rest of this book stays close to that of it’s first issue, we all may be plunking down the bucks for a blockbuster in a few years. So, do yourself a favor, put down the cash now for this series so you can join me in line later, where we can scoff at all the “normies” as they postulate where the series came from. We’ll point, and laugh, and clutch our signed issue #1 with either of the available covers (One cover by [[[Mouse Guard‘s]]] David Peterson, the other by Joe Abraham and Fellipe Martins).

Mr. Stuffins is brought to you by Johanna Stokes and Andrew Cosby, the creative team behind the television series [[[Eureka]]] that appears on the SyFy network. The plot itself starts out like so many series we’ve read before… A scientist finds out (gasp… yawn) that his project wasn’t being funded for the good of mankind, but for (gasp…) profit! Cut to some running, some desperation, and the haphazard placement of said “research”–in this case an A.I. Secret Spy program– into the closest object in reach. It’s here we meet our titular hero to be… as the program is placed in a child’s teddy bear. Akin to Teddy Ruxpin of my own youth, the bear toy is your garden variety singing, talking, pal-oh-mine all kids would adore. Of course, if our Teddy Ruxpin’s could secure the perimeter, whilst using Krav Maga on my enemies… maybe I wouldn’t have lost so many fights in gradeschool.

Smart folks will anticipate most of the plot points, but you’ll do it with a smile. We’re introduced to our P.O.V. family mid-crisis. Faced with his parents recent separation, our “everykid”, Zach,  comes into ownership of the aforementioned uber-toy. Hilarity ensues. Kudos to artist Axel Medellin Machain, whose crisp style lends to a very easy read. Anti-Kudos to Crosby and Stoke’s laughably one-dimensional big sister. It’s hoped in future issues we’ll see more sides to her. But I digress. When Zach’s “Mr. Stuffins” activates, I dare anyone not to laugh, snicker, and giggle just a little bit. In his debut panel, I was completely sold.  The juxtaposition of Stuffins personifying something similar to Arnold Schwarzenegger’s John Matrix in Commando is just too perfect. While nothing will surprise you during the read, you’ll be hard pressed not to love this book anyways– thanks in large part to a script that knows when to keep danger at an arms length, backed by solid art that knows when to give readers a beat to absorb the characters’ feelings.

Parents reading this review may ask how suitable it is for the youngsters. Know that there’s no violence “on screen”, nor dirty words to read. We feel for Zach, and he’s certainly the heart of this story. While I assume Mr. Stuffins may see more violence to come, this issue is certainly friendly. While the concepts inside are typical Hollywood “Blow’d Em Up Gud!”, Stokes and Cosby have set up a book that (hopefully) will stay towards the lighter side of the genres it’s incorporating.

Mr. Stuffins #1 hits shelves Wednesday, April 29th. Due to a fast moving script, and crisp artwork,  this book comes highly recommended. While it’s uncertain how graphic things may get, the heart is in the right place here. Add to your pull list, get ready… to get stuffed. Stuffed with awesomeness.