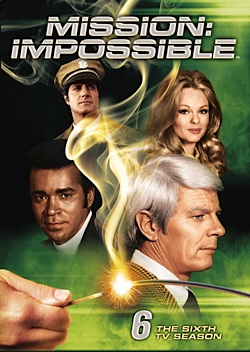 The concept behind Mission: Impossible

had never been attempted on television before and the CBS series about a covert government operation taking on; well, impossible, cases became a smash hit.  Guided by the steady Peter Graves, Greg Morris and Peter Lupis, the series received awards, acclaim and most importantly, ratings.  Early on, the show was also headlined by Martin Landau and Barbara Bain, but they left after three seasons. In stepped Leonard Nimoy, Lesley Ann Warren, and Sam Elliot for the next two seasons but by spring 1971, the show was beginning to feel tired.

Season six, airing 1971-1972,  was the season that should not have been. Paramount Pictures wanted the show canceled and placed into profitable reruns but CBS saw ratings upticks at the end of season five and wanted the series back. Nimoy wanted out, saying he was bored.  It was time to change everything up.

The penultimate season, coming out on DVD Tuesday, saw numerous alterations from the departure of Nimoy, Warren, and Elliot to a domestic focus.  Lynda Day George, an attractive red-head doubled as femme fatale and makeup expert, tightening the focus to just a quartet of regular agents.  Other IMF agents turned up largely as supernumerary fillers (with Elliot making one final appearance). The producers gave up on deposing fictional presidents around the world and sent the Impossible Missions Force against “the syndicate” (code for organized crime).

Watching these 22 episodes, collected in production order not airdate order, shows how far television writing has come. The characters are all ciphers despite their loyalty and apparent friendship for one another.  We know nothing more about them in season six than we did in the previous five.  The targets for each mission were also ciphers, all surface characterization and little else.  Each episode has a case, a complication, and a resolution with variety seen in the way of additional complications or locales.

Given the tighter team, Jim stopped flipping through pictures to select his team and we went right to the briefing scene. As the season progressed, each of the four got a chance to shine, notably Greg Morris, moved up to co-starring status. In between roles as a laconic thug, he also shone in “[[[Blues]]]” where he displayed his own golden throat.  Even Lupis got to do more than the heavy lifting this season, as he displayed technical know-how.  However, he was also the agent to fumble the most often, although this gave us a chance to see his iron will power when he was caught and drugged with truth serum in “[[[Double Dead]]]”. Based on airdate, the season effectively opened and closed with a spotlight on Graves’ Jim Phelps, who had to be blind in one episode then suffered from amnesia in another. As for the newcomer, Casey was well highlighted, especially in “The Bride” where she had to play innocent as well as strung-out and finally, dead.

The pleasure in rewatching these shows is to see how far we’ve come in terms of storytelling or in seeing familiar faces in guest roles.  One of the most preposterous but oddly satisfying stories, “Encore”, features William Shatner as a 65-year-old criminal duped into thinking 35 years have vanished all so the IMF team can find where he hid a body. It’s the most elaborate plot of the season and Shatner manages to sell it.

The ratings were strong, especially with the show in the Saturday at 10 p.m. slot, finishing the season 32nd which made CBS happy. You can relive those adventures if you’re a diehard M:I fan but this was not the sharpest season by far. The six-disc set comes with zero in the way of extras.