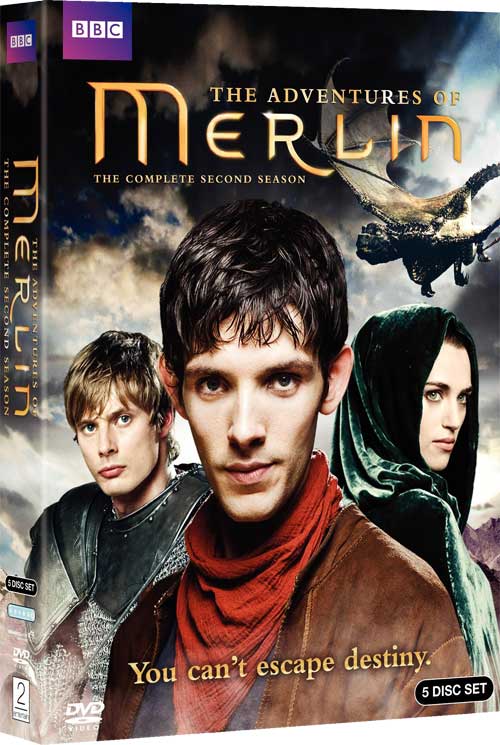 When a show deviates too far from the source material, its fate is in the hands of the writing staff who can take the raw elements and run with them or spin their wheels and grind the freshness out of the subject matter. Much as [[[Smallville]]] ran out of steam six seasons back, its spiritual successor, the BBC’s [[[Merlin]]], quickly lost its way in the first season. The second season, out on DVD now from BBC Video, takes great legendary figures and turns them into maudlin soap characters. When the first season came to America, NBC tried it out and the low ratings relegated season two to SyFy where the mediocre can rule.

The second season picks up as Uther Pendragon (Anthony Stewart Head) remains closed-minded to the dangers around him, focusing on eradicating witches and wizards despite growing threats, with “The Witchfinder” being particular ludicrous.  After “Sweet Dreams” and “The Witch’s Quickening” you would have thought Uther would have reconsidered his stand but no, the writers don’t seem to want real character growth or characters to act like real people. Throughout the season, Uther continues to act like a moron most of the time, with touching scenes here and there to attempt to round him out. When he reveals he is actually Morgana’s father, it’s done so badly; she overhears and has new cause to hate him. That Morgana (Katie McGrath) has powers does not seem to change his mind and he is blind to Merlin’s own abilities. He’s further blind to the notion that Arthur has fallen in love with Gwen (Angel Coulby) despite the gap in their status. Instead, he’s a writer’s pawn acting like a bastard because it suits them.

Merlin (Colin Morgan), keeping his magical abilities a secret, continues his education under Gaius’ (Richard Wilson) watchful eye. His heavy burden weighs on him throughout the season and he struggles with it, which is about the only character growth we get until the final episode, “The Last Dragonlord”: where he reunites with his father and gains yet another burden. Until he can truly be a court magician, he will continue to appear like a whiny boy.

Instead, the most interesting character development in season two is with Morgana, who comes into her own power after letting her occult abilities bubble near the surface since the earliest episodes. As she learns her true origins and nature, she acts out, angered at those who hid the truth from her and finds herself at odds with Arthur (Bradley James) and Merlin, who had only shown her friendship and support. And Arthur continues to struggle in the shadow of his father, recognizing how cruel he can be. Instead, thanks to Merlin and Gwen, he is displaying a conscience that should make him an excellent king, if he can ever get over his own self-doubt.

All the foreshadowing about the adult roles we know them to play is rich material but the writing rarely lives up to potential. Instead, everyone is flat with little subtlety or surprise. All too often people are enchanted or tricked or misdirected to believe things that beggar the imagination. As a result, the season meanders without much to recommend it.

The five disc set comes complete with a lengthy Behind the Scenes look at the show plus The Making of Merlin, which focuses more on the character. The cast and crew offer up introductions plus there are commentaries but none of the usual deleted scenes or gag reels. You do get a photo gallery and wallpapers. Still, this is a disappointing show that has limped through to a fourth season (the third debuts this week on SyFy).