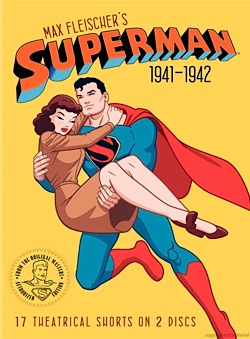 From 1941 through 1942, Max and Dave Fleischer rewrote the rules for animation and people have been trying to match those results ever since.  When no one had previously tried adventure in animated form, the Fleischers took their lessons from [[[Popeye]]] and applied them to [[[Superman]]] with astounding results.

The seventeen shorts, released by Paramount Pictures, were the closet anyone would come to bringing Superman to a live action feature film until Richard Donner achieved that goal in 1977 (and people have been trying to match that goal ever since).

Warner Home Video has previously included the cartoons as part of their mammoth tin can set of Superman features but now there’s a two-disc set, Max Fleischer’s Superman: 1941-1942

, which was released this week. Technically, one wishes they cleaned the prints a bit better before transfer but these are better than most of the public domain dubs that have been circulating since the 1980s.

The fluid action and rousing Sammy Timberg music remain indelibly etched in my mind from first experiencing these in the 1970s.  The plots are very simple, given the standards of the day, so there’s a threat, Lois gets in trouble, and Clark becomes Superman to save the day. Repeat seventeen times.  Given their short running time, there was no attempt at anything more than the most surface of characterization and the comics offered little in the way of recurring villains at the time (yes, including Lex Luthor). What they could have borrowed from the radio series, along with voice actor Bud Collyer, was kryptonite but chose not to do so.

Interestingly, there’s a warning on the box reading that the DVD set “is intended for the Adult Collector and Is Not Suitable for Children”. Hogwash. This is over-reacting to the mindset that children are fragile and the sight of Superman battling a dinosaur or a gang of robots would ruin their psyche.  If anything, this is a perfect vehicle for introducing smart heroic adventures to children as they seek outlets for such fare.

The extras are culled from elsewhere but are worth watching if they’re new to you. First, there’s The Man, The Myth, Superman which does a nice job surveying heroes prior to the Man of Steel’s arrival in [[[Action Comics #1]]]. Second is First Flight: The Fleischer Superman Series which clearly establishes how the brothers went from Koko the Clown to Superman and easily surpassed other animation studios. Trailers for other animated offerings and the [[[Green Lantern]]] featurette round out the set.

Bottom line: if you do not own these in any other manner, buy this set. If you already have all seventeen episodes, there’s little reason to buy them again.